… I paid a visit to the Ashmolean.  I took against the redesign because accessing the modernist painting displays proved such a complex procedure.  I ended up going backwards through time – beginning on the cusp of abstraction.  A Kandinsky landscape of the Murnau era – ‘Staffelsee I’ – leapt out at me, a lone example, full of the rich velvety purple hues of dusk in the mountains.  Chalet lights glimmer on the tenebrous slopes.  Below the sharp, rugged outlines above, I hesitated to ascertain where the landscape ended and the mirror image began, the reflections working to abstract the subject matter and confuse the eye.

Past two elegant nudes courtesy of Bonnard and Matisse, and I reached the dawn again in  Picasso’s ‘Blue Roofs, Paris’.  A reproduction cannot do this painting justice; it has in it all the essence of that feeling experienced when you open the curtains at sunrise and the world is glorious.  It’s there in the powerfully joyful, daffodil yellow of the the first rays of sun stealing up on attic bedrooms still shrouded in an indigo dream, and in it’s there in the boisterous clouds whose dance dominates the sky.

A whole roomful of Sickert and his Camden Town crew presented itself next, a true delight.  How, I wondered, is Sickert so very modern when his use of colour is so very limited in comparison to such paintings as the above?  Because, I supposed, of his spontaneous Impressionistic style, married to that very lack of interest in seasonal colour.  And to finish, the arbitrary cropping and sudden flashes of colour that epitomise a modern urban world of chance encounters and electric light.  The scene of the ‘rue Notre-Dame des Champs, Paris’ serves as a perfect illustration: a dingy night, shadowy figures hurrying home, the puddles a sinister yellow against the grey pavements, and the vertiginous buttress of buildings on the right seeming to encroach on the space of the street in a vaguely threatening manner.  One would flee to the nearest bistro if one were there.  Yet the whole composition hinges on a few delicate spidery characters etched in luminous yellow light, valiant against the rapidly approaching darkness.  There it is, the safe haven, a glass of absinthe waiting, or perhaps it is a venus fly-trap, tempting the urban wanderer to sin … but we will never know.

And in ‘Gaiete Montparnasse, derniere galerie de gauche’, the figure is almost lost within – or at the very least secondary to – the insistent arabesque.  What could possibly be more subversive or avant-garde than making the underside of a theatre box the dominant element in a painting?!  The lack of narrative, the cropping of the stage at its very edge so that nothing at all can be seen, and the tortuous angle of vision – Sickert did not need blazing colour to achieve his own artistic revolution in 1906-7.

The rooms became more opulent as we moved back through Impressionism – a roomful of Pissarro’s Eragny landscapes, developing to dew-drop fresh pointillism – to the nineteenth century and the Pre-Raphaelites at the far end.  En route, I came across this painting of an Edinburgh slum by James Pryde.  I suppose it should have been no surprise to read that he was a set designer, the building almost a cut-out facade and the rags hanging from the windows adding a heavy dose of melodrama.  Recent images of the poor orphan Cosette sprang to mind… Followed by an ironic smile at the memory of many shabby student flats in those old tenement buildings that are so peculiar to Edinburgh.  Goodness they were cold, and our washing flung about in a similar manner – though we lacked the touch of civility lent by the classical statue.

And finally, while trying to find my way out again, I was waylaid by a room full of oil sketches.  Two insisted that I stop and stare: Giuseppe de Nittis’ ‘Winter Landscape’ and Giovanni Boldini’s ‘In the Garden’.  Two Italians in the suburbs of Paris.  Two distant, anonymous figures of women tending their gardens under a cold grey sky.  Two black-clad wives, perhaps, missing the warmth of the Mediterranean sun. 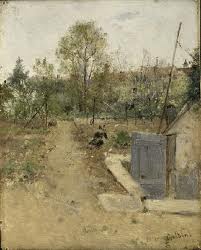