What an inspired collector Richard Harris is.  What other theme could draw together such a diverse and fascinating collection?  Nothing else binds art and science quite so intensely, or unites the aesthetic, the psychological and the ethnographic in one instantly recognisable figure.  ‘Death: A Self-Portrait’ combines a multitude of heterogenous material; only image as powerful and enduring as the Grim Reaper could possibly recur in so many different forms and across so many different cultures.

I will choose a few of my favourites.  Here is Irving Penn, better known for his elegant fashion photography, reinterpreting the ‘memento mori’ still life.  The striking monochrome and bold composition remain; the ‘life’ element does not.  Next to a typically sumptuous Dutch C17th example of the genre, Penn’s ‘Ospedale’ is spartan and irrevocably modernist. 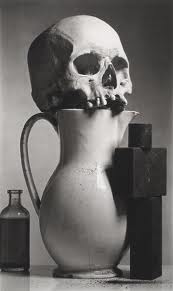 A few steps further on, and the doom-laden skull comes to life in an eerily comedic way… There is something vaguely worrying in the idea of a chemical company producing a calendar illustrated with Death in various cameo roles.  Death in a stripy dressing-gown at the Turkish Baths; Death as a troupe of helpful little elves at at the chemists… How was this ever conceived as good PR for the Antikamnia Chemical Company of St. Louis?  To me it suggests that their ‘opposition to pain’ relates to merciful release by way of a smiling skeleton proferring the potion he has happily concocted… 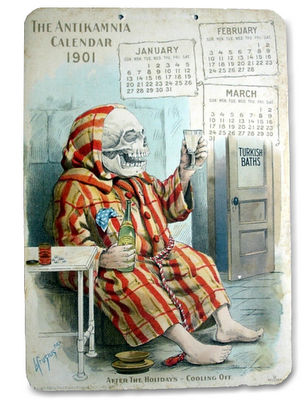 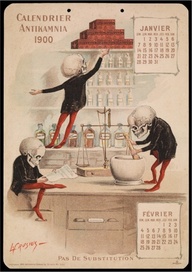 But Death has always had character.  And he has often been depicted as a figure of fun, especially in his attempts to dance.  The dance of death is an intriguing concept.  If one is dying one is probably incapable of dancing and therefore to suggest it is a cruel mockery.   Frolicking skeletons inevitably turn the solemn finality of death into a ridiculous farce – but maybe that is the idea: faced with dread of the inevitable and inexplicable, maybe it is better to laugh.  Here is Frans Franken II’s Death playing the violin, with his leg jauntily perched on an hourglass, mocking the poor man’s gout. 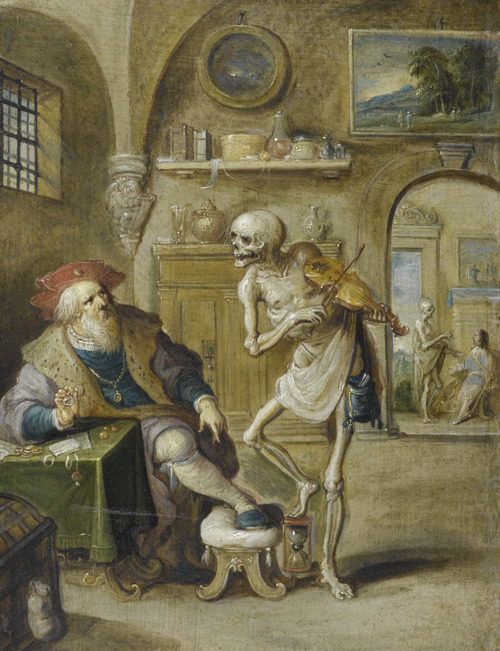 And Death’s penchant for dancing, playing musical instruments and other associated activities of a joyous and celebratory nature is certainly not confined to the Western artistic tradition.  Here is part of a Japanese screen painted by Kawanabe Kyosai: the delights of the ‘floating world’ of ukiyo-e invaded by absurdly vivacious skeletons.  One balances on a tightrope, flourishing an outspread fan in one hand and a parasol in the other like a macabre geisha.  Another has discovered a guitar and, crouching low with a flash of white teeth like a rockstar, accompanies his fellows as they gambol about, doing handstands and arm-wrestling. 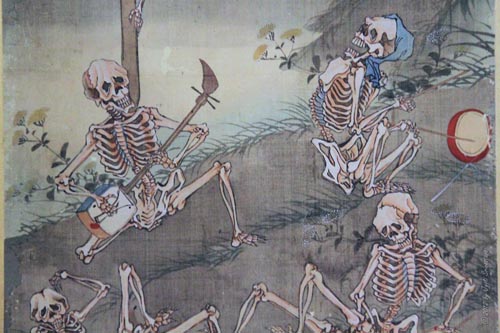 Death gatecrashes every party.  He appears in Tibet too, and Argentina, the international playboy, though however much he dresses up, he cannot disguise himself.  Is his omnipresence a reminder that we are all going to die one day, or because he is warning us not to party too hard in case we die sooner than we might (and is that a practical warning – see man with gout – or a moral one?).

Georg Grosz superimposes skulls onto found photographs in an irrational, nihilistic Dada spirit.  The anarchic humour of these images is countered, however, by the knowledge of their production in an age when the horrors of mechanical warfare had been witnessed on a massive scale, and in a post-war Berlin of hyper-inflationary starvation and vice. 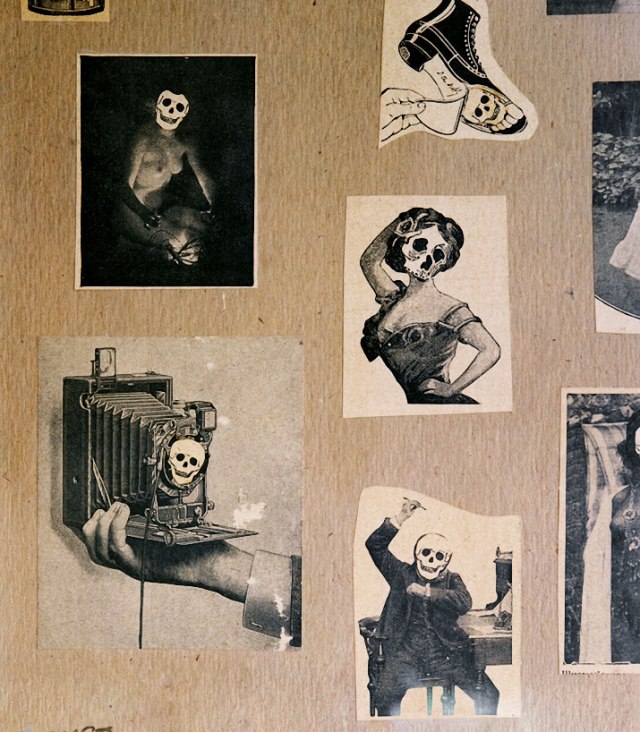 In some cases Death shows the less attractive side of his nature.  He is always there, hovering like a bad smell, on the eve of war, delighting in mayhem and mutilation.  Durer’s ‘Four Horsemen of the Apocalypse’ announce his immanence in a room dedicated to the three great series of war prints by Jacques Callot, Goya and Otto Dix.  And his cruelty and rapacity are illustrated on a more personal scale by Kathe Kollwitz’s etching ‘Death and the Woman’ and by Albert Besnard’s etchings, ‘Elle…’ 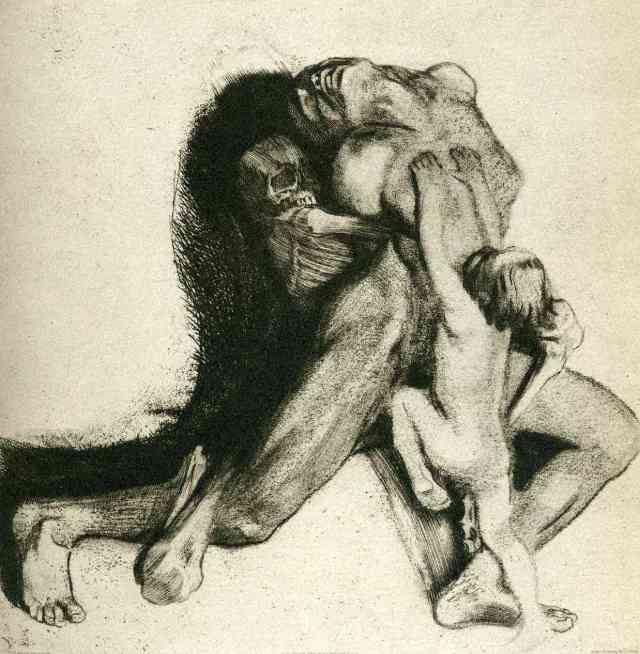 And then there is the way we react.  There are books of hours with their Prayers to the Dead, skeletons clambering about the elaborate margins; there are Tibetan ceremonial cups crafted from the human cranium; there are photos of altars erected to loved ones on the Mexican Day of the Dead, all ablaze with marigolds and bananas hanging from strings.

I was left wondering whether our relationship with Death is perhaps a little strange… it may well be the inescapable counterpart to life, but why do we endow Death with such a compelling personality?  Why do we enjoy dressing up in his guise at Halloween, why are there puppets of Death and ceramic figurines?  How did our nemesis become an acceptable decorative feature in our drawing rooms, a theatrical and literary amusement? Perhaps because a demeaning personification helps to belittle and humanise that which we dread.  The sardonic attitude of Terry Pratchett’s Death is exemplary: [in small caps] ‘People’s whole lives do pass in front of their eyes before they die. The process is called “living.”‘  Like June Leaf’s ‘Gentleman on a Green Table’, Death finds it a lonely life, always misunderstood. But he likes cats.  Cats are nice. 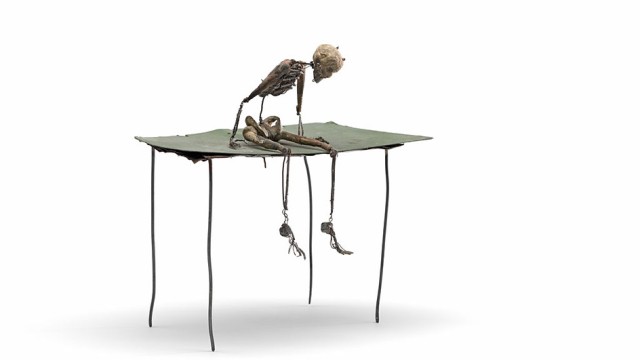