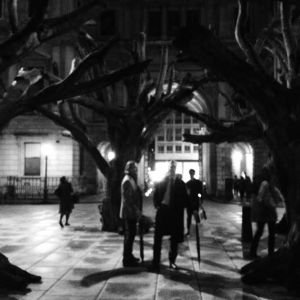 An antidiluvian forest has materialised in the courtyard of the Royal Academy; at night it feels almost like stepping into a fairytale.  These natural forms, sprouting from the concrete paving, are at the same time relics restored to a semblance of life.

As curator Adrian Locke writes on the RA blog: ‘In China, trees are venerated as important counterparts to the dead on earth … Ai’s trees are made from parts of dead trees that are brought down from the mountains of southern China and sold in the markets of Jingdezhen, Jiangxi province. Ai transports these to his studio in Beijing where they are made into trees … Tree has been likened to the modern Chinese nation, where ethnically diverse peoples have been brought together to form “One China”.’

This prelude encapsulates the recurring themes of the exhibition: scale, materials, recycling/renewing, politics – and the human factor: all are united in this preliminary concept, the largest gathering yet of Ai’s trees, thanks to a massive Kickstarter campaign of public funding.

Inside the echoing neo-classical galleries of the Royal Academy with all their gilding, plasterwork and marble one is yet struck by the scale of the work, the quality and weightiness of the materials. ‘Bed’ (above, 2004), its outline following the pattern of China’s borders in fragments of demolished Imperial temples, unfurls its ironwood form across the floor of the first gallery. Its impact is architectural, enduring and resilient – but at the same time isolated and dislocated in time and place.  In ‘Grapes’ (below left, 2010) a troupe of Qing dynasty three-legged stools perform a gymnastic back flip, while similarly venerable tables begin to climb up the walls.

Ai Weiwei is best known as a political dissident, famously undergoing incarceration and constant surveillance by the Chinese state authorities.  This experience and his personal struggle for freedom of expression permeates the exhibition.  However, the extensive texts introducing each gallery were crucial to understanding the layers of meaning contained within each piece. The porcelain crabs, for instance, though lovely objects in themselves, made a lot more sense once one knew that the Chinese word for crab is a homonym for ‘harmonious’, which is a catchword of the Chinese state and is also consequently used as slang for censorship.  But these little crabs are not just metaphorical statements; they tell the story of an actual event.

On the night that his Shanghai studio was demolished at the insistence of the state in 2011, Ai organised a public dinner where thousands of people dined on crabs. Ai himself was under house arrest but orchestrated this subversive ‘performance piece’ nevertheless – now marked by an edifice of rubble and a pile of porcelain crabs (one escaping up the wall…)

People are at the heart of Ai’s conceptual approach.  The handmade or artisan nature of every element is emphasised, reflecting the status of the individual as opposed to the mass-produced, the human as opposed to anonymous cogs in a communist machine. 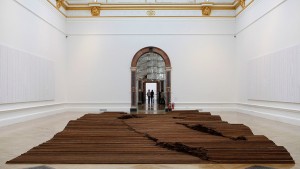 This last is made tragically clear in the lists of names of all the individual children killed in the 2008 Sichuan earthquake that line the walls around ‘Straight’ (above and below, 2008-12), an arrangement of thousands of metal bars made to strengthen the concrete of the jerry-built schools that collapsed. They trace the jigjagged path of a fault line in rusty earth colours, signifying the terrible power of nature. What gives the work such power is the history behind these objects (brought home by a documentary style film) and the scale of it once massed together, each rod representing a human life lost, as well as the time and effort that went into straightening each and every one by hand, despite Ai’s imprisonment and every other effort of the authorities to impede his message from reaching the world.

Ai’s skilful recycling of materials, creating a new beauty out of destruction, is ruined by his own acts of vandalism in the gallery of vases.  Here, neolithic vases are variously dipped in garish industrial paint (below), emblazoned with modern commercial logos, or smashed – as in the triptych of photographs ‘Dropping a Han Dynasty Urn’ (1995).

This wanton destruction in the name of ‘art’ seems a facile statement made in bad taste, but Louise Cohen plays devil’s advocate on the RA blog, asking: ‘was he sacrificing one pot for the greater good, highlighting what’s happening to Chinese heritage every day? Or was he asking us to question what we value?’  It is pointed out that fakes are rife on the Chinese market, while the techniques used to make them are probably the same as those used originally. Equally, once branded as the work of Ai Weiwei, is the ancient Han vase more or less valuable? It is food for thought. 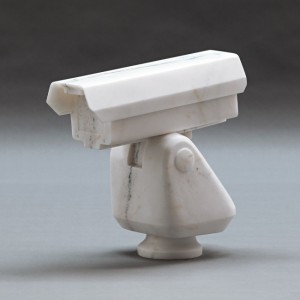 All the materials used are distinctly Chinese, speaking of China’s history, its cultural and political identity.  Besides the wood of the Imperial temples, there is marble sourced from an Imperial Chinese quarry – the same used for Chairman Mao’s mausoleum – fashioned into a marble surveillance camera (right, 2010) trained upon a marble pram upon a marble lawn.  There are jade handcuffs displayed like precious ornaments in glass vitrines, and hand-painted porcelain fitting together into a map of China, the ‘Free Speech Puzzle’ (below, 2014).

So although this is in many ways conceptual, performative art it confounds these boundaries to present room after room of visually astounding and materially exquisite objects.  And although Ai exploits the publicity and the PR stunt, his work speaks of more than yesterday’s news – it engages with history, culture, civilisation and humanity in a simple and powerful way.  And he has created a chandelier from bicycles – no excuse needed to love that. 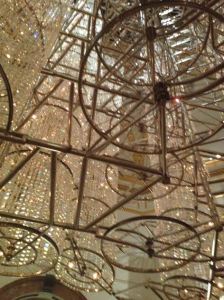