On Wednesday I visited the Fitzwilliam Museum.  I began at the end, with British Modernism.  With the voices of Cecil Beaton and Stephen Tennant still chattering in my head, I admired the small bronze figures of Frank Dobson, and rather less so the Epstein busts which manage to look scarily emaciated and overly sentimental at the same time.  And Stephen said to Cecil:  “I’m so glad Dobson wants to do us – what excruciating fun it’ll be!! – visiting each other’s bust & commenting cattily, – I want to be a voluptuous skeleton, – just cheekbones & a navel really … My “Epstein” bust is at the London Group show now.”  I want to be a muse.  Where are the sculptors?

I like the Sickerts – especially the Mornington Crescent Nude – and the Vuillards – especially one of a woman reading among the reeds, and another in which a large round dining table dominates the small canvas, with a rotund grandmother trapped on one side of this expanse, and a toddler on the other, its head only just peering over the edge and a small fist outstretched; the tea cups and the biscuits are neatly arranged in the middle, appearing beyond the reach of either.  One can only imagine the frustration of posing for that one.  I would rather model for Degas, ensconced in a Paris cafe with a glass of absinthe.

There was a balcony encircling the third room, high up, which looked tantalisingly unreachable.  A door opened onto a tight spiral staircase and led up to an intriguing display of small canvases hung in a line all the way round at eye level.  It started at Brueghel (school of) with some curling being played in a dark blue wintry landscape, and a gathering of tiny birds who were considering the bird trap with contempt.  It continued round to some portraits and self-portraits of British modernist luminaries such as Lytton Strachey by Henry Lamb (he has such a funny long, bearded, melancholic face.  Why was Dora so in love with him? It must have been his mind.)  Then I came across this extraordinary picture of Charles Ricketts and Charles Shannon as Medieval Saints by Edmond Dulac, whom I knew only as the creator of such ethereal and bewitching illustrations as the Ice Maiden, accompanied by polar bears and carrying a human heart in her delicate hands – a highlight of the Age of Enchantment exhibition at the Dulwich Picture Gallery a few years ago. 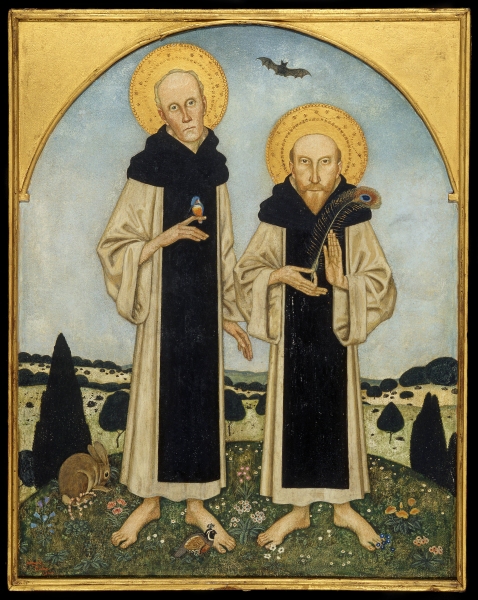 Ricketts and Shannon were artistic and personal partners throughout their adult lives, the Fitz website helpfully informs me.  They look and sound strikingly like a previous incarnation of Gilbert & George, although – thankfully – did not consider themselves ‘living sculptures’, and produced some really rather beautiful work.  Shannon (on the left) looks rather maudlin, caught perhaps at the very moment that he discovers his kingfisher has a terminal illness; Ricketts, meanwhile, with his neat pointed beard and self-satisfied hint of a smile, looks as if he is hatching some furtive scheme.  Having illustrated Wilde’s The Sphinx and designed the first British production of Salome, his reverently held peacock feather perhaps suggests that he holds a flame for Oscar, to his partner’s deep distress…  What gossip and scandal.  Must find out more.

The anarchy broke out as darkness fell and I returned to a London populated by diminutive demons wielding plastic buckets.  And then this appeared in our sitting room…. 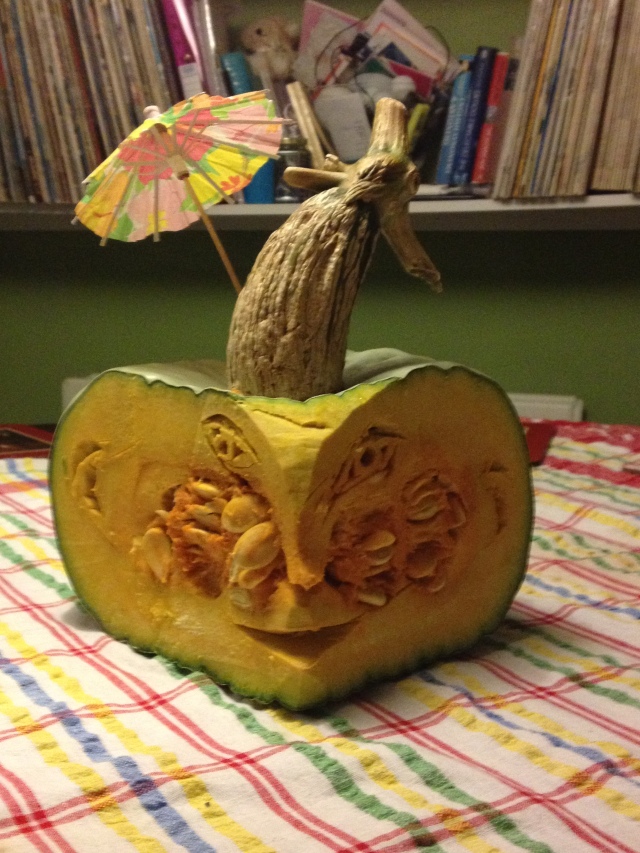 I’m sure Matthew Arnold would never have predicted an anarchy such as this.