I already knew Sargent painted sublimely, and would have been probably my top choice as a portraitist had I been living in the Edwardian age.  But ‘Sargent: Portraits of Artists and Friends’ is just as interesting in elucidating the sitters as the artist.  The National Portrait Gallery exhibition brings alive a whole society of late Victorian and Edwardian artists, poets, writers, actors and intellectuals, their vivid personalities and characteristic expressions captured in Sargent’s luscious and fluid brushstrokes.

Dr. Pozzi (1881, right), the ‘father of modern French gynaecology’, stands full length in a scarlet dressing gown like a Renaissance prince or cardinal.

Henry James (1913, left), a close friend of Sargent and a fellow American expat, is portrayed on his 70th birthday, a successful novelist who is yet contemplative and somewhat inscrutable.

In contrast, the portrait of the poet Coventry Patmore (1894, below right) depicts a sprightly, energetic, and fiercely intelligent old man, standing braced with a witty observation or acerbic comment on his lips. 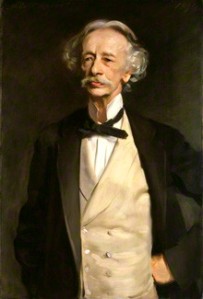 Robert Louis Stevenson is captured at home in two small and enigmatic portraits, one interesting composition featuring him, gaunt yet vigorous, striding across the low ceilinged room, his wife sitting incongruously doll-like in the background, the other displaying his long frame and expressive hands, arranged in a wicker chair as if in the midst of meditative conversation (1887, below). 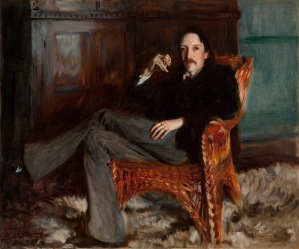 Vernon Lee (or Violet Paget, 1881, below right) was a woman of letters, feminist and pacifist – and a childhood friend of Sargent’s whom he portrays with tenderness and insight.  The rapid brushstrokes suggest that she has just turned with lips parted as she engages in debate or badinage with her hosts, her eyes behind wire spectacles shining with intelligence and passion. 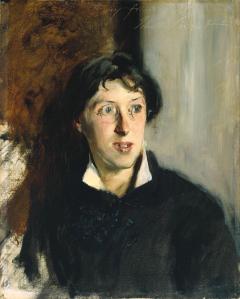 W. Graham Robertson (1894, below left) epitomises the youthful dandy of the fin-de-siecle with his Chesterfield coat and elegant cane; the slim pale boy with his worldly pose would become a well-known illustrator and stage and costume designer, and later a playwright. Sargent depicts him in the muted grey-toned harmonies of Whistler.

The exhibition follows a chronological path to a certain extent, and mid-way through presents a roomful of personalities with whom Sargent lived in Broadway, Worcestershire, from 1885-1889.  Here, the Tate’s famously ethereal Chinese-lantern lit nocturne ‘Carnation, Lily, Lily, Rose’ (1885-6) is placed in context; the girls were modelled on Polly and Dorothy Barnard, the daughters of one of the Broadway artists, Frederick Barnard, whose wife is also depicted here in a more traditional portrait format.

There are two interior scenes in this gallery that also stand apart from the portrait genre.  One depicts the Besnard family celebrating a child’s birthday; the other is ‘Le Verre de Porto’ (1884, right) which shows Sargent’s hostess in Sussex, Edith Vickers, as if captured unaware in a moment of reverie.  It is a scene more akin to Sickert with its low artificial lighting, domestic setting and sense of an unspoken private narrative – the cropping of her husband’s figure at the extreme right of the painting being another Sickertian trope, though one introduced by Impressionist painters such as Degas who were influenced by the recently available Japanese print.

At the far end of the exhibition, beyond the impressive array of portraits from the London, New York and Boston years of the  1890s and 1900s, is a small gallery of paintings made on European travels during these years which again show an alternative approach to the formal portrait.  ‘Group with Parasols’ (c.1904-5, left) is one of a series of ‘Siesta’ pictures that Sargent painted on a trip to the Italian Alps, in which four sleeping figures are almost indistinguishable from each other and the verdant pasture, precedence given to the effects of dappled sunlight and rhythmic composition – a loose, Impressionist style technique that was still extremely radical to British audiences.

‘The Fountain, Villa Torlonia, Frascati’ (1907, right) captures the artist Jane de Glehn painting, with her husband Wilfrid lounging beside her on the balustrade surrounding a fountain.  Like the Broadway interiors, this composition looks beyond simple portraiture to introduce a narrative element – that of the relationship between the Jane and Wilfrid – while also acting as a record of place and time, culture and mores, more completely than an individual portrait ever can.

Combining an artistic retrospective with what almost amounts to a visual biography of the artist, ‘Sargent: Portraits of Artists and Friends’ is fascinating, informative and full of character – an exhibition model that I hope the NPG will repeat.