From the Musee d’Orsay I made my way to Montparnasse, to a small backstreet just beyond the far corner of the cemetery, to the side door of a nondescript building next door to a day centre for the disabled, and rang the bell.  And was buzzed into the narrow white hallway of the Fondation Henri Cartier-Bresson, the photographer’s former studio. Rooms on the first and second floor serve as temporary exhibition spaces – the last time I had visited Cartier-Bresson’s own images were on display, accompanied by the sculpture of Giacometti.  This time it was a photographic project by Vanessa Winship – ‘she dances on Jackson’ – produced after winning the HCB award in 2011.  The award is intended to help fund an established documentary photographer to undertake a project that they would not otherwise be able to bring to completion.  Winship won on the basis of her project ‘La-bas: une odyssee americaine’, and subsequently spent over a year travelling across the US, searching to understand and capture the relationship between a person and place – and ‘that curious and inevitable solitude and melancholy created by the quest for the American Dream’.  So the images present both a sociological document and an account of a personal journey.

Indeed the titles read like jotted journal entries: ‘Birds rising along the Mississippi River, New Orleans, Louisiana’ (27 Feb 2012); ‘Deer on Highway Embankment, Buffalo, New York’ (4 Nov 2012).  But each piece stands alone as an image, a frozen moment at once intimate and anonymous – the joy and curse of the solitary traveller.  Landscapes and portraits are for the most part hung alternately, though there is not always a clear link between the 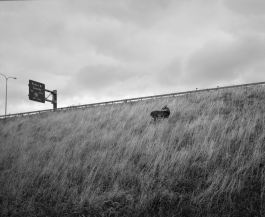 two.  The use of black and white film helps to detach the subject from its immediate context and allows it to become a work of art in its own right, contemplative and austere, rather than a snapshot reliant on the totality of the visual narrative.

In Winship’s words ‘this work is a chapter, a citation of America at a precise moment in its history, and also in mine’.

Henri Cartier-Bresson reappeared again the next morning at the Maison Europeenne de la Photographie, this time in front of the camera which was held by Andre Morain.  I reached the Marais long before the gallery opened and walked a leisurely circuit through the Place des Vosges and across to the Ile Saint-Louis before returning past the Hotel de Sens, a former archbishop’s palace that is now home to the Forney art library. 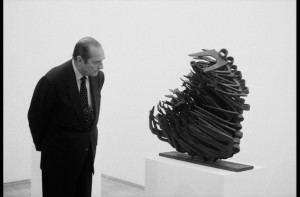 The exhibition of Andre Morain’s work was by way of a retrospective, but from a specific angle; it is essentially a chronicle the Parisian art world from 1961 to 2012.  Morain captures the gallerists, curators, artists, collectors and critics, as they debate, network, or assess the exhibits among the French cultural elite – challenging the artistic dialectic between looking and being looked at by putting them on display themselves.  And so Henri Cartier-Bresson and his wife Martine Franck are caught in a moment of intimate conversation on the occasion of the exhibition ‘En France’ at the Grand Palais, Paris in 1970.  In another image Jacques Chirac looks in bemusement at a work by Armand at the Jeu de Paume, Paris (1998).  Like Cartier-Bresson himself, Morain has a knack for capturing the ‘decisive moment’, the images spontaneous and often of a grainy quality in close-up.  Only here his subjects are never anonymous and always contained within the formal gallery environment that imposes a certain social etiquette; many of the figures are silhouetted, yet still instantly recognisable by a characteristic gesture or stance. 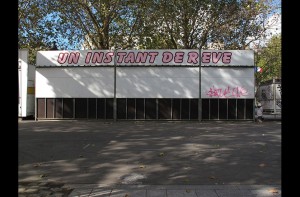 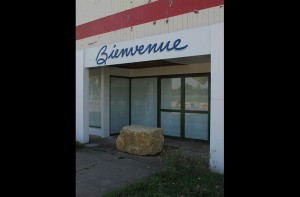 On the floor above, Claude Leveque’s photographs are presented in simultaneous slide shows, repeating a sequence of images in dialogue with one another.  Entitled ‘Un Instant de Reve’, the display is intended to reveal the artist’s everyday inspiration by means of a private “diary” of snapshots, a photographic sketchbook.

Leveque, the curator declares, is not a photographer but ‘an artist who takes photographs’.  His eye is caught by the amusing and the odd, the irony and the poetry of the everyday.  With its accompanying soundtrack of the typically French ‘Amelie’ variety, the show is like a collage of quirky observations  – scenes de la vie quotidienne.

Gustavo Speridiao uses the same slide show technique, alongside actual photographs (below).  In one slide show the repeated appearance of figures suggests the record of a journey – verging on the randomly taken snapshots of a backpacker’s serendipitous travels.

Other images are in pairs which play well together, contrasting images of classical architecture against metal construction work for instance. But otherwise the purported “assemblage” process only serves to fragment, the parts bearing little discernible relation to each other. ‘Geometrie. Montage. Equilibrage.’ is a suitably ambiguous title for what the curator confusingly describes as ‘real fictional glimpses of post-modern life … the global archive that is the world.’  A suitably abstruse, catch-all soundbite that lends spurious gravitas to what is essentially an arbitrary collection of images with very little meaning.

In the basement – a fitting location for his dark subject matter – is Philippe Favier’s  ‘Noir…’ which makes inventive use of ‘found’ photographs, collaged, layered with paint, or in multi-media installations. 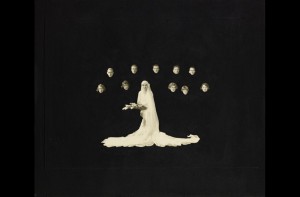 One series of cut-out photos on black acrylic backgrounds is collectively dubbed ‘Les Noircissiques’, amalgamating what literally translates as ‘black + narcissists’. There is certainly a sinister history hinted at in a piece such as ‘La Sirene aux Jonquilles’ in which a bride with her bunch of daffodils stands in a black void surrounded by a host of floating heads, appearing more like a commemoration of the dead that a celebration of marriage.

Another series, ‘Sciophiligrane’ (which I am unable to translate), presents carefully composed line-ups of photographic figures, like a visual genealogy or record of a community, pinned onto creamy watercolour paper.  The glass on top is etched with names and lines of connection, legible as the shadows of the incisions fall on the paper beneath.  This seems to emphasise the fragility of relationships, whether familial or social, and the fleeting nature of human life more generally. But the aspect of nostalgia  is violently altered on closer inspection, as one becomes aware that the eyelets are punched through the faces of each person, obscuring their identity in an almost sadistic way.  They are in fact anonymous specimens, collected and displayed like butterflies or beetles.  But they are also, or once were, individualised characters, here denied their unknown personal histories; each now distinguished only by their size, clothes, or gender, as by a governmental bureaucracy arbitrarily categorising its population in terms of statistics – and just as arbitrarily crossing them out.

With a certain dark humour, Favier adheres some of these missing faces onto the keys of an old typewriter, but with no paper they are rendered mute so their stories must remain a mystery.