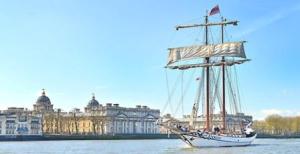 On Sunday we made our way to the Tall Ships Festival at Greenwich, where we had been invited for a tour of ‘The Swan’.  A small ferry-boat scooped us up off the pier and away from the crowds, across to a pontoon where four beautiful wooden ships were moored directly in front of the Old Royal Naval College – just far enough offshore to give a glorious perspective of Wren’s majestic design, itself framing Inigo Jones’s Queen’s House beyond.

Our host on board, John, gave us a tour below deck – not spacious by any means, it was beautifully constructed and very pragmatically designed – before giving us a short history of the ship.  The Swan was originally built in 1900 as a herring fishing vessel launched from Lerwick in the Shetland Islands, working from May until August, putting out drift nets at sunset and coming back into shore at daybreak to land its catch for gutting and curing.  At this point the herring fishing industry was at its peak with around 1,700 ships at work around the British Isles, and the salted herring were transported in barrels to Germany, Poland and Russia.  However, it was not long before steam drifters began to replace the sail boats – there are now only around 28 ‘super-trawlers’ in total.  The Swan was retired in the 1950s, and only rediscovered in Hartlepool in 1989, half submerged.  Having returned to Shetland, the Swan Trust was set up to fund the restoration of the ship and she was eventually relaunched in Lerwick in 1996.

Today the Swan is used as a sail training vessel and takes part in the Tall Ships Races, as well as being a ‘living museum’ dedicated to this key period of Shetland’s history.  As we left, a barbecue was being set up on the pontoon, and two of the crew were busily preparing kebabs.  Our departure was dramatically delayed due to the swell created by the big Thames clippers which made mooring alongside impossible for the ferry boat; so we sat a while longer, gently bobbing on the water, and admiring the view of Greenwich in the sunlight.

Back on land we headed for the heaving indoor market where all the cuisines under the sun seemed to be on offer – an appropriate fusion of cultures that almost allowed a glimpse of the bustling port the ships must once have known.