And so on Sunday afternoon we went to worship at the temple of modern art that is the White Cube in Bermondsey.  Within the great glass doors the atmosphere was hushed, and the vast white walls and concrete floor ascetic.  On huge white canvases, the surface as smooth as lacquer, Mehretu has drawn layer upon layer of intricate and precise architectural plans, constructing an urban geographical palimpsest, suggestive of the literal and metaphorical layers of history that a city embodies.  On top of this structural base, she has then sent splashes and daubs of black ink scurrying across the canvas, irreverently and haphazardly subverting the careful control previously established.  And on top of this a number of precisely defined abstract lines and arcs are picked out in strong black, white or brightly coloured acrylic. 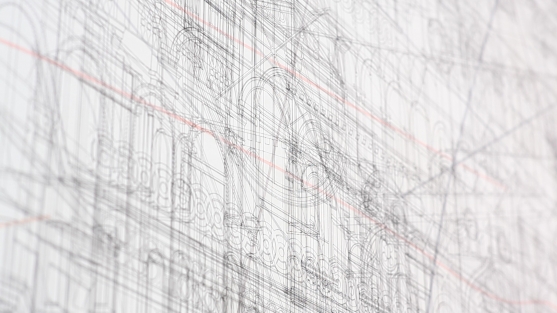 If the first two galleries are the antechambers, initiating the ignorant and acting as buffers to the outside world, it was in the third gallery that we reached the inner sanctum.  The space has been designed by architect David Adjaye, clearly revered in hip art circles, having previously designed the ‘set’ for the NPGs ‘Face of Fashion’ exhibition in 2007.  He had swivelled the walls, setting screens across each right-angle to create an octagonal space like the drum of a dome; the lighting was dimmed and the paintings illuminated by clusters of white spotlights as from a lantern. ‘Mogamma: A Painting in Four Parts’ were the apostles in the squinches; ‘Invisible Line (Collective)’ stood beyond, the high altar.  There were (appropriately modernist) pews in front of each, inviting silent contemplation.

Amid the carefully constructed architectural accumulation, the messy black brushstrokes might represent people, lined up in armies or demonstrations, or scattered in chaos by an explosion, leaving debris and carnage, undermining the semblance of order and threatening the geometrical control.  ‘Mogamma’ relates to the government building in Tahrir Square, Cairo; it also means ‘collective’ in Arabic.  Both meanings inherent in the title – revolutionary movements and peaceful gatherings – are contained in the mess of mark-making: humanity is causing chaos.  On top are the slogans, the symbols of the ideologies or creeds for which they are fighting or rejoicing – rationalisations of the irrational; or they are the lines on a graph, representing statistics that purport to abstractly tell the impossibly complex history of mankind through an emotionless, bloodless bureaucracy.  In Mehretu’s words, the paintings are ‘about ideas of power’, the struggle between freedom and control; this they very neatly display, encouraging apparently infinite freedom of thought within a carefully controlled setting…  Would we think the same of them if they sat outside on the street?