The Royal Academy’s ‘Painting the Modern Garden: Monet to Matisse’, begins and ends with Monet; Matisse barely appears, perhaps included in the title purely for alliterative effect.  Monet provides the constant touchstone running through this beautiful exhibition, and it is a joy to see the development both of his painting style and his gardens from the 1860s – on the cusp of Impressionism – to the majestic waterlilies of his final years.  The RA has brought together a fascinating range of lesser known canvases (many from private collections and American museums) that are the more interesting for not all being ‘masterpieces’. 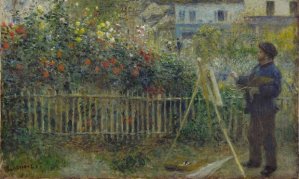 There is ‘Lady in the Garden’ (above, 1867), a smaller and simpler version of the Musee d’Orsay’s magisterial ‘Women in the Garden’; and then there is the comparatively garish scene of the artist’s children dwarfed by hordes of sunflowers of 1880. ‘The Artist’s Garden at Argenteuil’ (1873) and Renoir’s almost identical view with Monet at his easel (above right) contrast with the early flower studies by these artists and illustrate the rapid – and t0 many unsettling – development towards Impressionism. 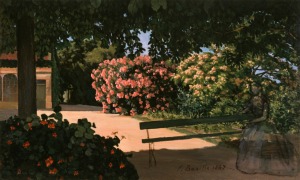 The gap between these two pairs of paintings was filled, in historical terms, by the Franco-Prussian war and the Paris Commune.  Frederic Bazille, killed in this conflict, is an often forgotten contemporary of the early Impressionists.  The ghostly figure in his sunlit garden scene ‘Les Lauriers roses (The Terrace at Méric)’ (above, 1867) is a poignant reminder of a career cut short.

It is also good to see more of Caillebotte, a more precise Impressionist whose passion for gardening is clear in the most believable of many painted nasturtiums (left, 1892), and in ‘The Wall of the Vegetable Garden, Yerres’ (below right), a view that would be chosen by none but a gardener.

Then the exhibition opens out to embrace a host of international artists, including several I didn’t know such as Joaquin Sorolla and Laurits Tuxen, and others whose paintings of gardens were new to me.  Sorolla’s portrait of Louis Comfort Tiffany (below right, 1911) surrounded by a an explosion of blooms is a floral highlight, while Singer Sargent is represented by numerous lilies from the same period as ‘Carnation Lily Lily Rose’ (though the absence of this piece is not quite compensated by ‘Garden Study of the Vickers Children’). 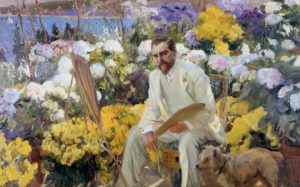 The RA must have relished the garden theme as an opportunity for a theatrical approach with the ‘atrium’ construction in the second gallery and the ‘greenhouse’ effect display cabinets.  The garden benches I could live with but for the rest I would have preferred the gallery walls to be used to their full glory, to see the painted geraniums tumbling from above, the lilies below, the canvases clustered as they would have been at a Paris Salon in very similar rooms to these in the late 19th century.

The ‘Avant-Gardens’ gallery (I forgave the pun) is an odd mixture, though successful in highlighting the many diverse directions taken by artists in the early years of the 20th century.  Some could have been better represented – Matisse particularly, and from all Van Gogh’s sinuous irises and flowering cherry blossom a strangely static and formal Auvers garden scene has been chosen.  Nonetheless there was a glorious selection, with Klimt’s mosaic of leaves and flowers (above left), Kandinsky’s Murnau garden of 1910, Munch’s glowering, biblical apple tree in pure blue, green and yellow, and Emil Nolde’s thickly impasto poppies (below right, 1908).

Meanwhile it was a pleasant surprise to find lesser known (and difficult to classify) artists such as Henri Le Sidaner and Santiago Rusinol represented so well, their canvases facing one another across the subsequent gallery, the one crepuscular (‘Steps, Gerberoy’, 1902, below), the other drenched in

Spanish sunlight (‘Gardens of Monforte’, 1917, below).  Both artists had inherited the Impressionist interest in atmospheric light effects, but rejected other elements of the creed; Le Sidaner, if anything preferred the term ‘Intimiste’ while Rusinol rejected the broken brushstrokes of Impressionism, preferring to maintain the solidness of

objects.  Similarly, the Nabis painters Bonnard and Vuillard worked from memory and sketches rather than completing their work en plein air and adopted the Fauve technique that gives blank canvas a positive role in the composition. A whole gallery is given over to large scale works by these two artists, including Vuillard’s two panel  ‘The Garden of Le Relais at Villeneuve-sur-Yonne’ (1898). 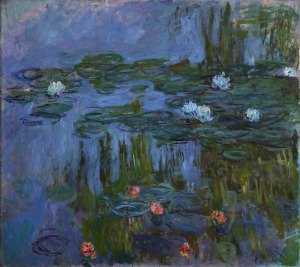 Then, swiftly, as if with relief, the narrative returned to Monet, with two rooms full of waterlilies and weeping willow (above, 1914-15), sensuous and contemplative, allowing the eye to melt into the deep pigments, the reflections and stillness.  The final Agapanthus triptych (part below, 1916-19) was a the culmination of this period and – reunited for the first time in Europe since it was painted – a suitably climactic finale. 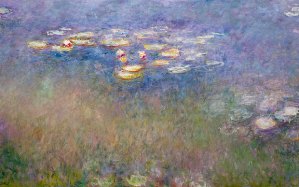 There was excessive veneration heaped upon this assemblage of Matisse’s cut-outs for months in advance of its opening.  I have always admired Matisse’s work – and he is undoubtedly a Modern Master – but this is not a full retrospective (if it were, and included ‘Le Bonheur de Vivre’, I might understand the hysteria).  It is an exhibition of his late career when, unable to hold a paintbrush, his creativity found a new outlet in cut-out paper collages.  This a long-overdue show full of joie-de-vivre, and, more than his paintings perhaps, these late works deserve to be seen at first hand to gain the full impact of their method and their sumptuously bright colours.  As an exhibition, then, I loved it; its exaggerated billing as the Show of the Century, however, was unnecessary and irrational – indeed detrimental to a more nuanced understanding of his extended career and of artistic modernism more widely.

The Tate is to be praised for its clear demonstration of how the cut-out technique evolved within Matisse’s oeuvre (initially as a compositional aide, whereby cut-out still-life elements could be moved and pinned at will until the balance was satisfactory enough to paint) and for drawing attention to the materiality of the paper and paint.  The effect of layering – paint upon paper, cut paper upon paper – makes the collages almost sculptural, or at least something hovering between two and three dimensions.  And the myriad tiny pin-holes tell a story of an energetic and exacting creative process, of compositional trial and error, of a living and evolving work of art.  Matisse himself appreciated how much life was lost in the printed copy as his series ‘Jazz’ was produced, the cut-outs accompanied by notes in the artist’s wonderfully looping gallic handwriting.  ‘The Horse, the Rider and the Clown’ (top) and ‘The Fall of Icarus’ (above) both 1947, are examples of the various themes encompassed within the series. 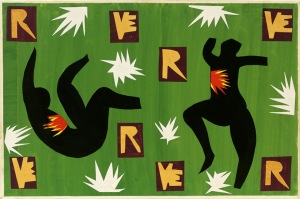 His cut-out figures seem to float like thistle-down, or dance about manically, little demonic shadows, always full of passion and energy.  They appear again in the designs that were commissioned for books and journals – such as that for the cover of ‘Verve’ IV (1945, above).  These early cut-out designs begin by trying to imitate the long, sinuous Matissean brushstroke in paper; but soon the artist realises that paper should not pretend to be other than cut paper, and its intrinsically sharp, graphic, colour-block qualities come to the fore.  There are designs too – barely contained on the walls of the not diminutive Tate Modern – for the chapel at Vence, its stained glass windows and chasubles, making me long to see the fabled chapel in its actuality.

Abstraction ensues.  It comes gradually, with mermaids and parakeets hidden among the seaweed-like forms in a gigantic collaged tapestry of 1952, or faces forming a figurative focus in ‘Large Composition with Masks’ (1953).  Then these references are discarded, and in 1953 we have ‘The Sheaf’ (above), an explosion of the motif that Matisse seemed to find so satisfactory and expressive.  In contrast, ‘The Snail’ (1953, below) uses simple blocks of coloured paper, that only perfunctorily allude to the creature of the title. 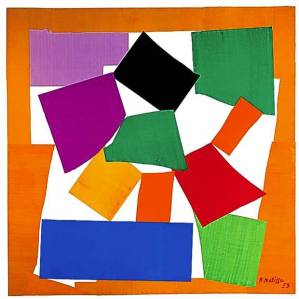 Best-known, perhaps, of Matisse’s cut-outs are the Blue Nudes (below, 1952).  Calm and serene, their decorously intertwined limbs are sculpted in searing azure.  ‘Blue Nude IV’ (bottom left) was the first attempt at this subject, and the preparatory arcs of charcoal still faintly visible in the background, the cautious, exploratory layering of small paper building-blocks, testify to this.  The following versions – all, in contrast, cut from large single pieces of painted paper – appear somewhat less successful, the head either overly large and clumsy, or the legs uncomfortably twisted.  The sequence in the abstract, however, is an aesthetic triumph.