The fifteen years from 1920 (when they met) to 1935 were formative ones for both Ben and Winifred.  The young couple were finding their way in life and in art, travelling to Lugano, settling in Cumberland, then discovering St. Ives; only in 1935 did Ben Nicholson produce his first White Relief which today sums up his art for so many.

The Dulwich Picture Gallery documents their close working relationship with paintings, often of the same subject, placed side by side, and in this way reveals just how considerable was the influence of each on the other.  It is immediately clear that Winifred was the colourist, her combinations of pigments taking precedence over lines and volumes in defining her subject matter; while for Ben the opposite was true – his focus on linearity, form and structure was to the exclusion of almost all colour in some works.  What is so fascinating is to watch how they began to learn from each other, gradually developing a really powerful and individual artistic language.

The Nicholsons, after their marriage in autumn 1920, spent their winters at Castagnola, above Lake Lugano in Switzerland.  ‘1921-c.1923 (Cortivallo, Lugano)’ (above left) shows Ben’s reaction both to modern French art – especially Cezanne and Picasso – and to the Italian primitives such as Piero della Francesca.  The two rigidly vertical trees create a structural grid for the composition, while the focus point of the cube-like red house emphasises the otherwise limited palette.

In contrast, Winifred was at this time painting works such as ‘Cyclamen and Primula’ (c.1922-23, above right).  The pots of flowers which Ben gave her became the focus of an exploration of the relationship between interior and exterior, still life and landscape; but foremost was still her joyous use of colour which forms the compositional lynchpin. However, here too one can see the influence of Cubism in the peaks of tissue paper that fuse with the distant mountains behind. 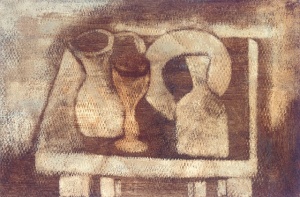 In the second gallery, a display case introduces some of the pottery of William Staite Murray.  Initially it is difficult to see why, apart from the friendship between Ben and Murray, his work is included in this dialogue between Ben and Winifred; but the sympathetic hanging subtly makes this clear.  Murray was a modernist potter who first exhibited with Ben in 1927, and with both Ben and Winifred in 1928.  Their domestic still life paintings, such as Ben’s ‘1926 (Still Life – L.L.)’ (above), perfectly complemented – in fact were interchangeable with – the actual physical pots created by Murray. 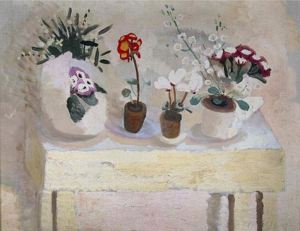 While Ben flattens perspective and reduces his palette almost to monochrome, with the paint scraped back so that the flat canvas base is revealed, Winifred continues to paint with thick, luscious pigments and a more conventional pictorial space (as in ‘Flower Table: Pots’, c.1927, right).  Here too are exhibited some of her figure paintings of home life – ‘The Warwick Family’ (c.1926) and ‘Father and Son’ (1927), a tender portrait, the baby’s eyes wide and curious as it is cradled by its father at the tea table.  There are no outlines; all form is created purely from the colours and textures of the paint itself.

In 1923 the Nicholsons purchased Bankshead, a farmhouse in Cumberland which thereafter became their base, though they continued to travel constantly.  In 1926 they met Christopher Wood who came to stay with them in Cumberland in spring 1928, and became the third party in this partnership of intense artistic experimentation. 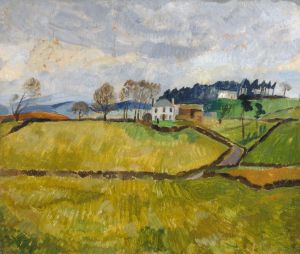 During the late twenties all three attempted the same scene of of the farmhouse, showing their differences of style as well as how closely they worked together.  In ‘Northrigg Hill’ (c.1926, above centre) Winifred focuses on colour, the only definition to the undulating tones of green and brown, blue and grey, being the dark ribbon of the hedges and the flash of pink on the lane (a colour she recommended to Ben, who used it in a still life – ‘1925 (Jamaique)’).  Wood’s ‘Cumberland Landscape (Northrigg Hill)’ (1928, above left) uses gestural, directional brushstrokes and is perhaps the most detailed of the three – although he was increasingly influenced by Ben’s simplification processes. 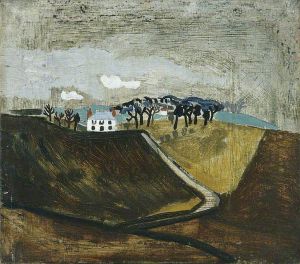 These are demonstrated in ‘1930 (Cumberland Farm)’ (right) which reduces the foreground to almost geometrical lines and planes; the house and trees on the horizon line are symbolic focal points of colour and substance amidst the severely rubbed-down canvas.  Another technique Ben developed at this time is seen in ‘1928 (Walton Wood Cottage No.1)’ where he uses great sweeping brushstrokes of a thin pale wash as a background, with faux-naif trees and a horse painted on top with precision.

In summer 1928 the Nicholsons were invited to stay with friends at Feock on the south coast of Cornwall, where they were joined by Wood and his muse, Frosca.  They painted views of Pill Creek, Winifred letting her vivid sense of colour run free – as in ‘Summer’ (1928, left), in which the turquoise water seeps into the background of the floral display to the fore and between the trees and cottages on the far bank.  Ben sketched the scenes of boats and harbours, but was unable to render convincing movement; he finally achieved this in his painting of the same spot, ‘1928 (Pill Creek)’.  This is a sombre and mysterious scene, and uses his characteristic techniques, with swirling brushstrokes of wash animating the background, then extensive rubbing-back to the pale gesso ground, and the shadowy trees and boat simply delineated in pencil.

This painting was probably done from memory back in London, by which time Ben had met Alfred Wallis – as is suggested by the primitive representation of the sailing boat.  All three artists moved on to St. Ives in September 1928, the Nicholsons overlooking the harbour, and Wood on Porthmeor beach.  Their work from this period shows the decisive influence that Wallis had, to a greater or lesser extent, on them all.  For Winifred, this is most evident in ‘Boat on a Stormy Sea’ (1928, above right).  The waves rendered in loose watery brushstrokes shows a wonderful freedom of handling, while the spray of the breakers and around the little boat is thick and opaque, yet with a wonderful sense of movement. 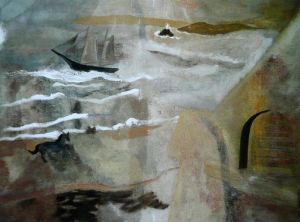 Ben, too, began to use more impasto paint against his spare backgrounds, thus anchoring and defining his boats so that they seem to move believably through the water – for instance in ‘1928 (Porthmeor Beach, St. Ives)’ (left).  He also includes Godrevy Island with its lighthouse in the top centre-right, which was a distinctive feature of Wallis’s compositions.

The final room is a hurried epilogue describing the separate paths that the artists took after these fruitful years of mutual exchange and inspiration.  ‘Le Phare’ (1929) and ‘Zebra and Parachute’ (1930) show Wood developing a surrealist approach, using increasingly odd juxtapositions, before his suicide in 1930.

Winifred, whose personal style was defined from early in her career, continued to produce her exquisite flower paintings.  But ‘Winter – Fishbourne’ (1931-2, right) and ‘Autumn Flowers on a Mantelpiece’ (1932) – if anything more accomplished and refined than ever – are a little pale and melancholy, for Ben had left her in the autumn of 1931 and moved in with Barbara Hepworth.

Interestingly, after moving to Paris in 1932 and befriending such avant-garde artists as Mondrian, Gabo and Helion, Winifred turned to abstraction, again inspiring Ben in his transition to abstract relief paintings – the first was made while staying with her on the Quai d’Auteuil.  It seems unfair that Winifred, who earlier in her career gained more acclaim, and supported and encouraged Ben until the point when his career took off, should be allowed to slide into the shade, eclipsed by the ‘St. Ives group’ that Ben and Barbara Hepworth became associated with.  It is a great relief that the Dulwich Picture Gallery gives both an equal voice.