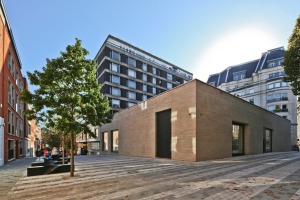 Caruso St John seem to be the architects of choice for contemporary galleries at the moment.  Gagosian have worked with the architects before – on their London Britannia Street, Rome and Paris galleries; Damian Hirst has clearly been impressed by the success of these spaces and chose to work with them on his enormous Newport Street Gallery.  The new Gagosian (above and below) is on Grosvenor Hill, a quiet paved mews in the heart of Mayfair.  The design is slick but unobtrusive, simple rectilinear forms, slim pale bricks and large squares of plate glass – the ultimate ‘white cube’ approach. 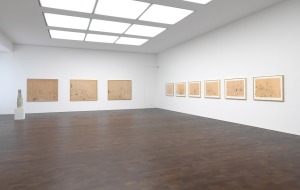 Gagosian have inaugurated this space with an exhibition of Cy Twombly, following a tradition which has seen the artist inaugurate galleries in London Britannia Street (2004), Rome (2007-8), Athens (2009) and Paris (2010).  The first room displays sixteen works on paper from the 1969 Bolsena series – the classic Twombly accumulation of scratchy mark-making, numbers and scribbled shapes in crayon and pencil that flow from the bottom corner of the sheet like an eruption from the mind of a frenzied mathematician or scientist. 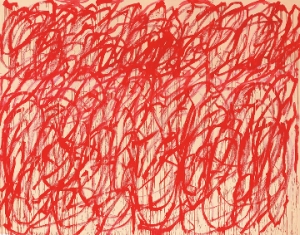 The second room contains more recent work – two enormous, ‘as yet unseen’, Bacchus paintings (2006-8, above) which take up a wall each.  Red acrylic is swirled over the canvas with joyous abandon and allowed to drip, the solid, purposeful, gestural strokes in tension with the thin, passive drips that coalesce into layers of pigment, an orgy of blood or wine.  On the two walls between hang another pair – Untitled (2007, below) – of a similar scale, each a diptych, one thinner vertical panel painted with jagged blue lines reminiscent of a hospital monitor, the other almost square and scrawled with purple amoeba-like forms.  The latter, like the Bacchus paintings are energetic and dripping with paint, full of life. 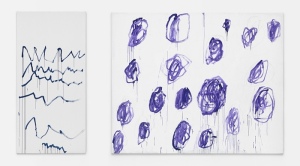 In between are placed a number of sculptures, which are so much more diminutive than the paintings – or even the works on paper – that they make less impact than they should.  One (Untitled c.2004) has the appearance of malleable clay with thumbprints indented, and yet is cast in bronze; it is the size of a battery or engine yet without the sharp edges or the practical purpose – it sits somewhere between the biomorphic shapes of the paintings and the mechanical formulae that the drawings suggest.  Another (Untitled 2001-2) appears to be a cloth tied with string around a slim wooden totem, covered – almost dripping with – white paint; yet this too is cast in bronze. 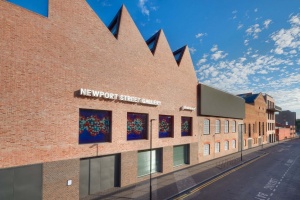 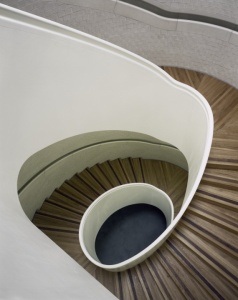 It is fortunate that the Newport Street Gallery (above) is named after its address; I was able to navigate my way by iPhone to a back street tucked behind the train line running into Vauxhall station.  The gallery encompasses three converted 1913 scenery-painting studios together with two new buildings, spanning almost the entire length of the street.  Treading in the footsteps of Saatchi, Damian Hirst has created this cavernous gallery space to show works from his own private art collection.  With one double-height gallery and part of the upper floor lit by the sky-lights of the jagged roof, clean wood and stone spiral staircases at either end and industrial concrete floors, this is cutting edge art world minimalism in design. 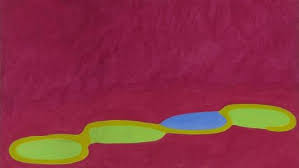 He has begun with ‘Power Stations: Paintings 1964-1082’, a retrospective of John Hoyland, a British abstract artist who wholly deserves a reappraisal.  There is nothing ‘Sensation’ or Brit Art about it; Hoyland is a serious painterly painter.  He was influenced, like Agnes Martin, by the American Abstract Expressionists, whose work was exhibited at the Tate shortly after Hoyland moved to London from Sheffield in 1956.  The earliest works on show here (such as 17.5.64, above) are bright patches of colour – from black to orange and a luminous acidic green – that resonate with almost visceral force against deep saturated red backgrounds.  In fact all the paintings in the first room use stained red grounds with more solid blocks of colour superimposed; these are discrete forms, but with soft edges, some appearing to seep or melt into the background colour. 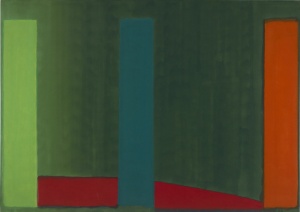 In the next space are green stained grounds (12.6.66, above).  Much like Martin, Hoyland quickly stopped using circles to focus exclusively on rectilinear forms; unlike Martin, he uses these to create a sense of depth and space within his paintings.  In some of the green paintings the contrast between the relative opacity of the paint, and between the geometric forms plays with our perception of depth – like Escher drawings, one cannot quite tell where all the parts exist in space. 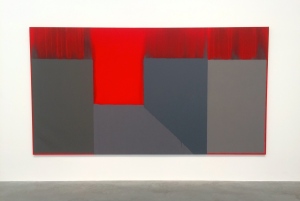 The harsher grey on red of 29.12.66 (above) in the following room creates a more architectural space and a solidity that echoes the concrete floor, its one diagonal sufficient to create a strong perspective.  But this effect is undermined as the clean lines delimiting the areas of colour dissolve into one another at the top of the canvas.  After this, in the late sixties, Hoyland added more colours to his compositions which start to detract from the overall effect.  Upstairs the paint becomes thicker, more sharply defining the overlaid forms; it is more gestural, more textural, less controlled – but the dirtier, messier colour lacks vibrancy and it loses its power. 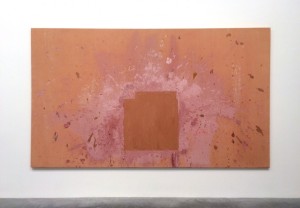 A series from 1971, associated with the period Hoyland spent at his Wiltshire studio in Market Lavington, is a complete departure (23.2.71, above).  Hoyland suddenly turns away from his strong saturated palette towards pale neutrals and flesh tones, using very impasto paint on lightly stained, almost bare, canvas.  The approach appears far more spontaneous here, an explosion of marks burst out from the relics of rectinlinear forms at the centre of the canvas. 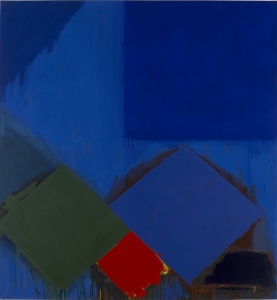 In the 1980s Hoyland returns to his glorious colour fields – and for the first time begins to give his paintings titles alongside their completion dates. Many paintings of this period, such as Scando 2.10.80 (below) or Advance Town 29.3.80 (above), are formed around strong central diagonals.  The use of paint is more varied, with staining, drips, the palette knife and finger painting all employed with a freedom that recalls Twombly’s late paintings. The colours are layered so that some forms are only glimpsed at the edges of a superimposed plane of colour.  Memory 8.3.80, especially, builds up a sort of palimpsest of colour, like a billboard constantly stripped back, revealing little bits of the past: the painter revisiting his lifetime in paint. 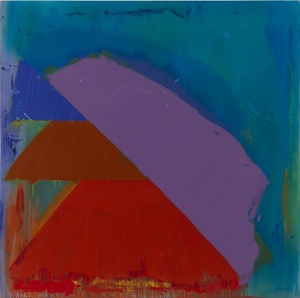 Haphazard, I visited three exhibitions over the weekend; as it turned out, each had something in common. All three artists reached their mature, abstract styles during the 1950s, a period when American Expressionism dominated the avant-garde.  Two were in new venues designed by Caruso St John; another – Tate Modern – is about to launch its new extension by Herzog & de Meuron.  All made an impact with their extraordinary use of colour and their glorious, tactile, textural use of paint.  For a start, Agnes Martin… 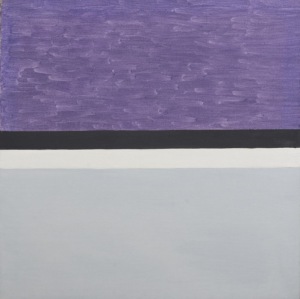 I rushed to Tate Modern first of all as I realised that the retrospective of Agnes Martin was about to end.  Martin’s early abstract works referenced numerous masters of American Expressionism as she tried out various different approaches. The earliest are somewhere between Joan Miro and Cy Twombly, with floating biomorphic forms on a painterly white ground and lines like threads or roots or scratchy hieroglyphs.  ‘Harbour’ develops the amoeba-like forms into something more solid, with echoes of William Scott; while further on the shapes are simplified as Martin moves towards a paler vision of Mark Rothko and Barnett Newman – both of whose influence she acknowledged (‘Untitled’, 1959, above). 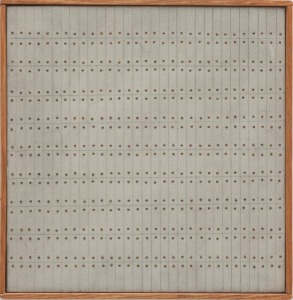 In fact, Martin was taken on by New York art dealer Betty Parsons, who represented both Rothko and Newman.   From Taos, New Mexico, Martin moved into a sailmaker’s loft in New York to take up this offer; here she experimented with ‘found’ objects, producing some sculptural pieces using driftwood and nails, and also incorporating nails into paintings on canvas such as ‘Untitled’ (1962, above).  These remain an anomaly in her career, but were perhaps in some way instrumental in her move towards ever simpler forms – squares, rectangles, dots and repetitive linear marks. 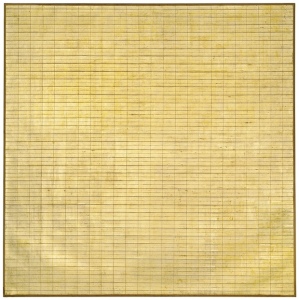 ‘More and more I excluded from my paintings all curved lines, until finally my compositions consisted only of vertical and horizontal lines’ Martin has explained; yet her series of large square canvases from the 1960s-70s show the powerful effect that this austerity of means could produce.  The ‘aesthetic of the grid’ is explored in all its subtle permutations (even using gold leaf in ‘Friendship’, 1963, above top); Martin painted the canvas – usually white or pale grey – before constructing intricate grids using pencil lines.  An early series from the 1960s are like an intense study of workbooks – maths books, accounting books, lined notebooks – rational and repetitive in design, but on a grand scale strangely hypnotic and deeply calming (‘Morning’, 1965, above).  The human hand is ever there, in the texture of the painted background and the lines which sometimes waver very slightly and do not quite meet that edge of the canvas – yet the superimposed grid structure contains and controls this human fallibility.  Together the series has an almost monumental presence. It is interesting that curator at this point informs us that Martin suffered form schizophrenia. 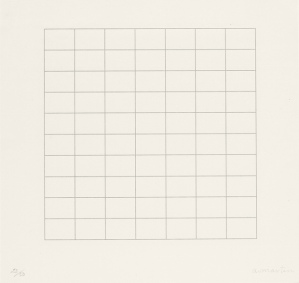 This striving for control and perfection is given new form in a series of thirty screen prints, ‘On a Clear Day’ (1972, above), completed in Stuttgart, Germany.  There is something perverse about using the roundabout method of screenprinting simply to reproduce pencil-drawn grids, perfectly.  Some grids are contained, others open-ended, untethered and infinite; all thirty are different, variations on a theme rather like music.  Then colour returns with a series from 1974, pale pinks, blues and yellows softly applied to a surface of acrylic gesso in precise rectangles or stripes, delineated by the ever-present and just-visible pencil lines (‘Untitled #3, 1974, below; ‘Untitled’, 1977, study on paper, bottom). 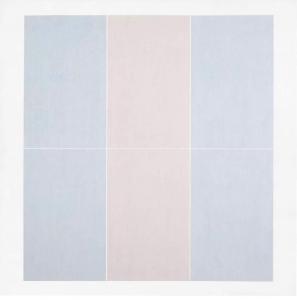 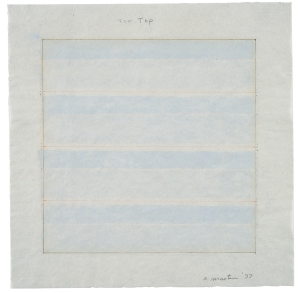 The grey paintings that began in 1977, though reduced in colour range, are more varied in technique.  In one, Martin uses a textural gypsum ground covered by a wash of Indian ink on top of which her habitual horizontal bands are drawn in graphite.  Some paintings are graphic, using flat planes of paint and sharp edges; others are like studies of the surface of rocks, up close and on a large scale (‘Untitled #12’, 1977, below). 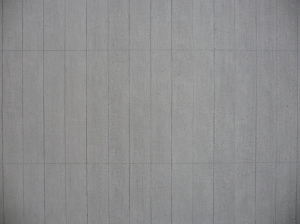 Next door is a series of twelve white paintings, ‘The Islands’ (1979), with pencil lines as fine as cobwebs and such pale modulation of colour that it might just be one’s vision playing tricks.  They are dreamlike, the shifting lines creating a silent rhythm, almost pulsating around the room.  Everyone was silent, inspired by a contemplative awe; or was this prompted by the curatorial text asserting that the paintings should ‘invite concentrated looking’ and ‘convey a contemplative quality’ reflecting ‘East Asian philosophy and spirituality’?  Context and cultural norms will always play a part – a painting above an altar will often inspire awe and a certain mystical transcendence that it might not if it were on the wall of a canteen or an office, though it might still glean respect and admiration. 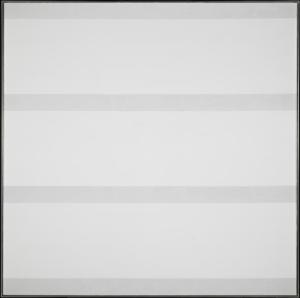 Martin’s later career (she lived until 92, back in New Mexico) shows her revisiting past styles – the colour stripes, the grey paintings (‘Untitled #5’, 1991, above), the early Rothko-esque canvases – but with a brighter, looser paint surface, and in some the introduction of solid geometric shapes superimposed (‘Untitled #1’, 2003, below).  These are the closest Martin gets to ‘landscape’; while the work of other artists drawn to New Mexico, such as Georgia O’Keeffe, are suffused with natural forms, there is none of that here.  Yet there is a common feeling for the wide empty spaces and timelessness of that land, something primitive and elemental. 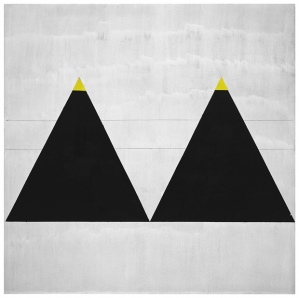 Next episode: Cy Twombly at the Gagosian and John Hoyland at the Newport Street Gallery…