Midway between lunch in Soho and Green Park tube I detoured down Albemarle street on a gallery trawl.  My first port of call was Marlborough Fine Art, where I found a retrospective of Avigdor Arikha’s paintings and works on paper dating from the mid-1960s until his death in 2010 (‘Self-Portrait Hand on Head’, drypoint, 2003, above).  The gallery represents the artist’

s estate and has curated a concise exhibition representative of the many different mediums and subjects that attracted Arikha after his return to figuration in 1965.
Having begun as an abstract expressionist in the 1950s this was quite a sudden about-turn, which is attributed to the artist’s friendship with Giacometti whom he met after settling in Paris in 1954.  Certainly Arikha’s etchings and drypoints reflect something of Giacometti’s austerely monochrome style with their layers of nervously jagged marks creating tight and psychologically penetrative portraits.  Robert Hughes described Arikha’s works as having an “air of scrupulous anxiety”.  The adoption of printmaking went hand in hand with Arikha’s return to figu

ration, as if in turning away from the abstract he felt the need to turn away from the loose painterly qualities of oils to in a definitive and decisive manner. Looking back on his abstract period, Arikha recalled “I was quite successful as an abstractionist. But I started painting my own set of forms over and over again. Finally, it repulsed me.” His portraits – mainly himself, his wife and his great friend Samuel Beckett – are precise, with an intimacy and directness that makes one feel almost uncomfortable (‘Samuel Beckett Seated’, etching, 1972, above right).
Alongside these are studies of trees and flowers in soft drypoint or sugar lift aquatint, and still lifes such as ‘Le Pain’ (etching, 1976, above left) or a pair of shoes that in their isolated centrality seem to deserve the status of ‘portraits’ too.

By the early 1970s, Arikha began painting again, but continued to experiment with different materials.  The greater part of the hang alternates his charcoal drawings – soft, loose, expressive but ascetic portraits – with drawings in Sumi ink, pa

stels and oils that range from the human figure to still life and studies of natural forms (‘Jerusalem Bread’, oil on canvas, 1981; ‘Trees at Evian’, Sumi ink, 1997; and ‘Orange Tie Folded’, watercolour, 1975, above; and ‘Sleeping Nude and Indian Rug, 1985, left).
All have a contemplative stillness that turns the trivial – a piece of toast sitting on the grill, a jacket carelessly strewn or a glimpse through a doorway – into something abundant in meaning.  These are almost surreal in their awkward simplicity, their latent anthropomorphism, speaking of a wealth shared history with poetic concision. 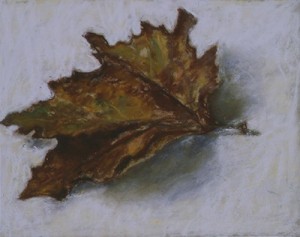 A little further up on Grafton Street Spruth Magers is showing the photographer and conceptual artist Keith Arnatt. ‘Absence of the Artist’ focuses on Arnatt’s work between 1967–72, key years in which modernism began to be replaced by a more sceptical post-modernist ‘dematerialisation’.  For Arnatt, at the forefront of this movement, this took the form of site-specific or time-based performances, which he recorded by means of photography. 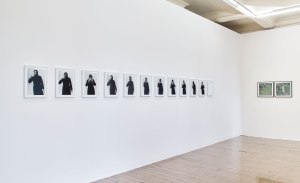 As the title suggests, Arnatt’s work questions the role of the artist. “He thought there was a governing idea of art as driven by a central figure – the artist – and he was interested in what happened if you made that person disappear,” explains Matthew Arnatt, the artist’s son.  This is explored in literal terms in ‘Self Burial’ (1969, below) in which a sequence of nine photographs documents the gradual disappearance of the artist into the ground.

Arnatt wrote of this:

‘An interest in illusion (and delusion), in the sense of creating a false impression runs throughout much of my work. For example, the ‘Self Burial’ photographs create the illusion that something is happening to me’

‘… it is true to say that the apparent absurdity, or silliness, of Self Burial is an important part of what I liked about it … And I also rather liked the slightly Chaplinesque quality of the photographic sequence— the fact that it shows me just standing there whilst something quite alarming seems to be happening to me (a metaphor for my condition as an artist?).’

A self-parody-cum-postmodernist-critique perhaps – but with a good dose of self-indulgent wit. A more interesting investigation of illusion and perception is ‘Mirror lined pit (grass bottom)’ and its companion piece ‘An invisible hole revealed by my own shadow’ (1968-9) which trick the eye, the ‘invisible absence’ of the pit only revealed by the artist’s shadow, which is yet another absence. Performance art – by nature transitory and preserved only through photographs and documentation – gained status during the 1960s and 70s, and Arnatt’s work is closely related to land art such as Richard Long’s ‘A Line Made by Walking’ (1967, above left). In this photographic piece the artist, though absent, records his physical presence within the landscape.  It was a radical new approach and hugely influential in expressing contemporary concerns with impermanence, motion and relativity.

While Long’s work is ultimately reflective, and expresses a quietly powerful, elemental dialogue between man and nature, Arnatt takes radical ‘dematerialisation’ to ridiculous levels.  ‘Is it Possible to do Nothing as my Contribution to This Exhibition?’ is a perverse and pointless pseudo-philosophical text. However, on the adjacent wall hang a series of eleven photographs representing Arnatt eating various bits of paper (‘Art as an Act of Retraction’, 1971, above right); the final frame contains the words in list form: ‘Eleven Portraits of the Artist about to eat his own words’.  Perhaps a repentant acknowledgment of the lengthy and pretentious tract…

As a photographer, Arnatt’s talent is undoubted.  And he is at his best here in the witty, quasi-surreal images that hark back to the visual puns of Rene Magritte, such as the eponymous ‘The Absence of the Artist’ (1968, above) – a sign bearing these words, pinned to a stone wall – and ‘Portrait of the Artist as a Shadow of his Former Self’ (1969-72, below).

The show is sparse.  In fact, any fewer works and it would hardly justify the title of exhibition. Perhaps this is standard for the presentation of ‘conceptual’ art?  But, having first come across his work at The Photographer’s Gallery exhibition in 2007, which considered his later career from 1972-2002, I have always considered Arnatt an inspiring photographer, and while interesting in revealing his early work, this display did not do justice to his considerable talent in this field.

On Thursday I saw the Bronze exhibition at the RA.  Far later than everyone else, I know, but in the relative peace and tranquillity that presides at 8am.  In a pre-coffee state, I was quite prepared to ignore all the blurb and just look at the sculpture without trying to form any sort of art historical interpretation, or even a compare and contrast sort of attitude; if anything I returned to my childhood approach – ‘out of everything in THIS room, what would I take home?’  Well, of course what I would really like is to have the entire Royal Academy as my personal museum, on a deserted island a bit like the one in Bond where he first meets the villain.  But failing that, here are some of my choices and rejections.

The Dancing Satyr, yes, as this was the only piece in the first room so no difficulties there.  Only if I had some sort of circular entertaining space with spectacular lighting.  Really, what better to set an example for a really Bacchanalian party than this figure totally absorbed in his ecstatic dance?  The only really obvious example of influence the curators allowed was the (not quite) juxtaposed Etruscan votive figure with a small Giacometti.  I found that very satisfying among the overwhelming variety elsewhere.  The Etruscan version showed a smiling boy’s face with a sort of Tintin quiff aloft a very elongated body; Giacometti’s figures are more melancholy, haunted, a tortured aspect to their roughly modelled, skeletal features – maybe they feel their lack of votive purpose in this alienating modern world?

The animal rooms were always going to be a difficult choice.  Who wouldn’t want a small elephant from Shang dynasty China from which to pour their wine?  Or a pair of good-natured and well-groomed leopards from mid C16th Benin to guard one’s entrance?  The Egyptian cat was perfect, sleek, mysterious, and utterly contemptuous of its neighbours – Picasso’s baboon (constructed from a vase and two of his son’s toy cars – can you imagine the distress of the small boy? Unlikely that he appreciated his father’s artistic Genius in this case) and Germaine Richier’s Praying Mantis, a towering but petrified threat.  The monster pug was in a league of its own. 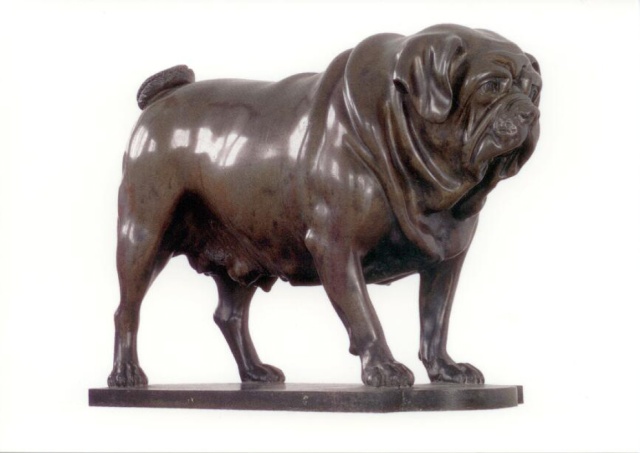 Too much to write about… Only I can’t resist mentioning Adrian de Vries’ Hercules, Nassus & Deianira (1622); oh, the drama of the rearing centaur and his hapless victim – totally ignored by the mongrel who is wearily trying to protect his flask of wine.  And the Etruscan Chrysippos Cista – one of the few blurbs I did read, but which failed to inform me why there should be two soldiers carrying a naked woman horizontally on the lid (dead? drunk? fainting?) or why the claw feet of the vessel rested upon squashed toads.  And nearby, the Aquamanile Lion from Hildesheim, who with downturned eyes seems to smile indulgently as a lizard-like creature with a fleur-de-lys tail whispers in his ear (helpfully forming a handle in the process).  Or the Emaciated Buddha, a sad sight with his protruding ribs and veins in the company of so many well-fed brother buddhas (not one I would take home; he is not enjoying the party).

The contemporary additions were well chosen to show the diversity with which bronze could be employed; however, it was difficult not to notice a certain art-for-art’s-sake quality – in contrast to the functionality or decorative purpose of the sculpture of the past – which sometimes slipped into cynical subversiveness in the case of Jasper Johns or Jeff Koons.  Hepworth and Kapoor provided positive examples of absolute abstraction that allowed an appreciation purely of material and form without distraction.  And in the last room, Brancusi’s Danaide (1918) would be my final choice.  Primitive and glowing, in symmetrical perfection, her ghost of a smile silently and hesitantly heralding peace and the modern age.