In 2009 David Boyd Haycock wrote a book entitled ‘A Crisis of Brilliance: Five Young British Artists and the Great War’.  The five artists referred to are Stanley Spencer, Paul Nash, Mark Gertler, Richard Nevinson and Dora Carrington, and the title is quote from Henry Tonks, Professor of Drawing at the Slade during the crucial decades which saw the emergence of some of the greatest British modernist artists. The Dulwich Picture Gallery has now brought this narrative to life in an exhibition that traces, through paintings, drawings and prints, the development of these five frien 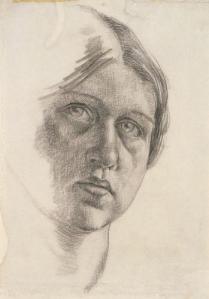 ds from their Slade training, through their disparate responses to the Great War, and leaving them post-war with a nod to their future careers.  We are introduced to the five central characters, along with a few of their lesser-known contemporaries, in 1910-1912.  Portraits of themselves and each other show the emphasis on the traditional skill of draughtsmanship that the Slade was renowned for – though the school otherwise had a fairly avant-garde reputation.  More interesting are two drawings from the imagination; Spencer’s ‘Fairy on the Water-Lily Leaf’ combines the strange and fantastical cast of Richard Dadd or Arthur Rackham with the solid, down-to-earth mien of the women who peopled his beloved Cookham.  Nash’s ‘The Combat’ (above) illustrates a poem written shortly after his mother’s death in a mental asylum; an angel stands on a hilltop fighting a winged devil that has flown down from the star-speckled sky.  The combination of religion and poetry seems indebted to Blake, or perhaps more immediately to the Pre-Raphaelites, while the detailed – and very English – landscape recalls the etchings of Samuel Palmer.  It is the latter element that would come to define the artist’s future career.

The introduction to the following sequence of paintings describes the impact of Roger Fry’s exhibition, ‘Manet and the Post-Impressionists’, in 1910.  The pictures, however, tell a different story.  Though this exhibition undoubtedly had a pivotal effect upon the consciousness of the British art world, the immediate reaction among our protagonists appears more ambiguous, and the insistence on its impact therefore misplaced.  On the one hand we see Dora Carrington continue to produce accomplished studies of Renaissance-style nudes, as well as a charming scene of Bedford market in pencil, ink and watercolour – a far cry from Parisian modernism.  On the other, we see Nevinson and Bomberg charge ahead towards abstraction, but in apparently the opposite direction from the French avant-garde – Nevinson embracing the dynamic and fractured Futurist aesthetic promoted by the Italian Marinetti, and Bomberg striking out on a totally individual path with ‘Racehorses’ (above, 1913), an almost unidentifiable mass of sharply angled, tubular limbs. Despite the clear disparities, Spencer’s ‘John Donne arriving in Heaven’ was included in the following Post-Impressionist exhibition in 1912 – a painting less Post-Impressionist, or more steeped in English landscape and culture, is hard to think of.

The divisions only become deeper as the bond of the Slade is broken and each artist moves forward in a different direction.  The London art world at this time was fraught with factions. The Bloomsbury critic and painter Roger Fry set up the Omega Workshops in 1913, keen to attract new talent; but soon after its establishment, Wyndham Lewis fell out with Fry and set up his own Rebel Art Centre, more avant-garde in its aesthetic links to Futurism (though Lewis repudiated any association with Marinetti’s movement by announcing his own: Vorticism).  Gertler and Carrington remained with the Bloomsbury circle; Nevinson joined the rebels.  In addition, the Camden Town Group continued to show their work together, and, attracted no doubt by the emphasis on landscape (and townscape), Nash exhibited with them in Brighton in 1913-14 – though so did the Vorticists, so no real oppositionary stance can be concluded from so catholic a show.  These two groups, Camden Town and the Vorticists, combined to exhibit as The London Group after 1913.  Such a plethora of new styles and artistic theories, into which the five young artists were thrown, can only result in a confusing and eclectic array of pictures.  Those exhibited certainly show the variety and extent of experimentation, but fail to maintain any real unity between the protagonists.

Nevinson visited Paris, where his nascent Futurism became more Cubist – especially in ‘Le Vieux Port’ (above, 1913-14) where typescript appears in fragments across the facetted surface, as it was doing simultaneously in synthetic Cubist works.  Meanwhile, the statuesque figures of Spencer’s ‘Apple Pickers’ and Gertler’s ‘The Fruit Sorters’ (right) start to show an appreciation of Gauguin.  But each remains idiosyncratic, with Gertler returning to his Jewish East End heritage, and Spencer’s work forever rooted in Cookham.

The war presented a decisive moment in all these artistic careers, establishing some, unravelling others, and bringing many to an untimely end.  Nevinson, who volunteered as an ambulance driver in France, produced perhaps his best and most memorable work in response to his experience on the Western Front, and later on the Home Front too. 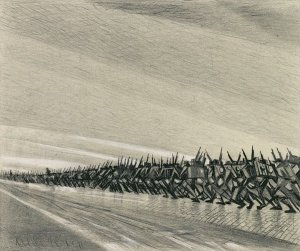 His study for ‘Column on the March’ (left, c.1914) shows just how successfully he adapted the dynamism and sharp lines of his Futurist/Vorticist aesthetic to the subject of war, causing the Times to observe that “Mr Nevinson gives you the black gloom, the horror, the feeling of despair that make even death and mutilation seem trivial incidents in an epoch of horror.”  Nevinson taught Nash various printing techniques, resulting in lithographs such as ‘The Pill Box’ (below, 1918); typically of Nash  – and most famously in paintings such as ‘We are Making a New World’ – all human life is absent, its destruction and mutilation signified by that of nature in the amputated tree trunks and disfigured, pock-marked earth.  Bomberg, like Wyndham Lewis and William Roberts, was commissioned by the Canadian War Memorials Fund; his first response and the one exhibited here, ‘Sappers at Work’, was dismissed as a ‘futurist abortion’, forcing him to return to a more recognisable figurative and narrative style.  This reaction was necessitated across the board in order to fulfil the documentary requirements of war commissions, as can be seen in Nevinson’s official war paintings such as ‘Southampton Docks’ (below) and ‘La Patrie’, depicting wounded French soldiers lying in rows in a barn.  This enforced adaptation of avant-garde tendencies at such a formative stage would alter the course of modernism in Britain; Lewis, Roberts, Nevinson, Bomberg – all came closest to abstraction in the years immediately preceding the war with the encouragement of their peers, and all essentially returned to figuration and relative isolation afterwards. 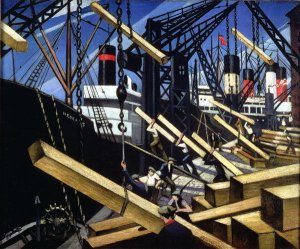 In contrast to such paintings are Gertler’s and Carrington’s; from those represented one would never know there had been a war at all.  Gertler was a pacifist and joined the conscientious objectors of the Bloomsbury group at Garsington, painting the gardens and literary friends such as Gilbert Cannan.  Carrington met Lytton Strachey and her portrait of the writer with whom she became obssessed (below) is the only example of her work shown in this section.  This total dislocation from world events is misleading, however, as Gertler’s ‘The Merry-Go-Round’ is a powerful and unsettling attack on the futility of war and arguably his most famous work.  Its absence is inexplicable.

After the war the artists were even more literally divided; Nevinson went to New York, Bomberg to Spain and then Palestine, Nash to Dymchurch on the Kent coast.  Dora Carrington visited Spain with her brother, but lacking confidence in her abilities exhibited little, and committed suicide after Strachey’s death in 1932.  Gertler, having been regarded at the Slade as the most talented of his generation, rejected the lucrative career of portraitist and gassed himself in 1939.  The most successful career in terms of longevity and status was that of Spencer who, after his stint in the RAMC – to which the Sandham Memorial Chapel stands testament – remained for the rest of his life in Cookham, gaining a knighthood in 1959.  The final room does little to sum up the show, but its muddle does at least adequately represent the chaos of the post-war British art world.  Carrington’s portrait of the farmer’s wife, ‘Mrs Box’, is majestic and one mourns the loss and lack of recognition of such a timeless talent.  But it is the odd-one-out among its companions, which maintain in their many incarnations a dialogue with their time and place.  The final, monumental, painting – Spencer’s ‘Unveiling Cookham War Memorial’ (1922) – provides a much needed sense of an ending.  Like a Renaissance fresco in its scope and subject, it shows middle England coming to terms with the recent war, human emotions existing side-by-side with a religious sense of redemption. 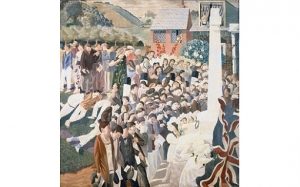