This compact little exhibition at the National Portrait Gallery is an ideal reintroduction to some of the protagonists of the First World War.  First there are the monarchs: the Tsar, the Kaiser, the Emperor, and King George V with their stately mien, flashes of gold and military accoutrements – accompanied by a small and pathetic photograph of the young Serb who brought three of them down. 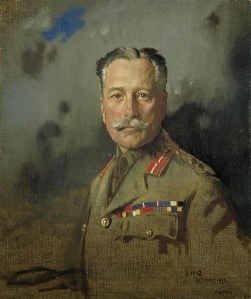 Next door there are the military leaders (Haig above, Foch below right) – most, it seems, dragged out of semi-retirement.  William Orpen was chosen to immortalise them, his flattering impressionistic style making them appear distinguished yet human, the honours pinned to their uniform the only flash of bright colour. Orpen is an often forgotten name in British art; it is good to see here how he earned his once impressive reputation.

Accompanying the leaders are a few selected pictures of the ‘ordinary soldier’ – one also by Orpen, the Grenadier Guardsman facing his superiors alike in stance, from a canvas of equal size.  Others show Tommies in action in the trenches: crouched below the tangle of barbed wire firing a machine gun in C.R.W. Nevinson’s angular, futurist style ‘La Mitrailleuse’ – and the aftermath in ‘The Dead Stretcher-Bearer’ by Gilbert Rogers (below). In the central display cabinet these glorified or explicit portraits are countered by postcards of these same figures that were widely produced and disseminated, small, disposable or collectable – and back in 1914-18 not confined to the rarefied halls of the gallery. 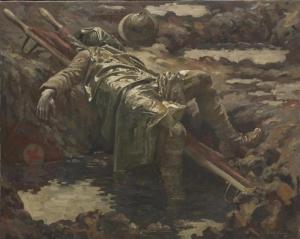 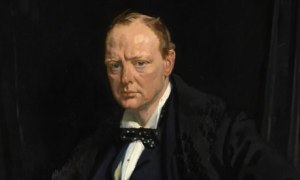 Through the entryway into the large final space one is confronted by Orpen’s 1916 life-size three-quarter length portrait of a very gloomy Churchill. As First Lord of the Admiralty, Churchill had just suffered the ignominy of the defeat at Gallipoli, for which he was consequently forced to resign from government. It is more powerful than any of the satisfied elderly ‘hero of the nation’ portraits that followed, and works here to conjure up exactly the feeling of tense uncertainty that every man in power must have felt as each offensive increased the vast list of the dead and the position returned again to stalemate. 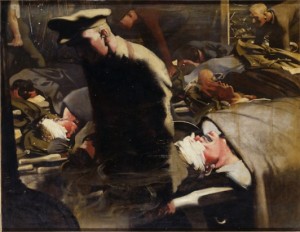 At the far end of the room entitled, melodramatically, ‘The Valiant and the Damned’ there is a wall of digitised photographs of a diverse selection of participants in the war, from Mata Hari and Wilfred Owen to the first black officer in the British Army. On the right of this are portraits of a number of ‘heroes’ of the war, whose personal stories of bravery are fascinating to read; on the left are some pictures by official war artists of the actual conditions facing the unlucky casualties of trench warfare, such as Eric Kennington’s ‘Gassed and Wounded’ (above). There is also a small and graphic display of Henry Tonks’ – now well-documented, but until recently not available to public view – pastel portraits of plastic surgery patients alongside the medical photographs showing the progress of the treatment. 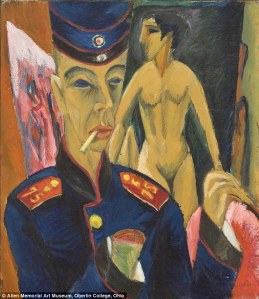 In contrast to the documentary realism of such official British war art, the curator has inserted a few German Expressionist paintings inspired by the conflict which show how the chaotic situation in Germany conversely encouraged radical modernism to flourish. Kirchner’s ‘Self-Portrait as a Soldier’ (above), all jagged forms and intense, nauseating colour, places the war in the context of a disillusioned and decadent Berlin. It is an interesting juxtaposition to end on: Epstein’s ‘Rock Drill’ (below) stands at the entrance/exit, a forceful statement of a pre-war modernism that was quenched – the robotic sculpture literally amputated – by the allied reaction to the horror of the first mechanised war. 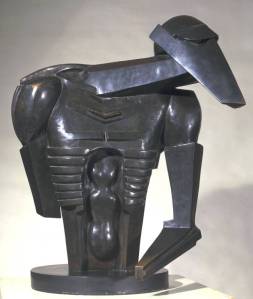