Usually the sheer quantity and diversity of work in the Summer Exhibition is something of a poisoned chalice for curator-RAs who want to impose any order or theme.  This year, however, Richard Wilson seems to have been fairly successful.  The theme quickly became obvious: Artistic Duos (see Eva & Adele’s ‘Transformer-Performer Double-Act VIII’, above).  Even as we climbed the stairs to the vestibule,

Jane and Louise Wilson’s ‘Atomgrad’ photographs (left) filled the panels to either side with scenes of derelict interiors, fallout from the Chernobyl disaster (this theme of urban wasteland and empty interiors was another that reappeared later on).  By the time we entered the central hall – the first gallery, in an interesting break from tradition – we were left in no doubt: from the petrified petrol pump, a forlorn centrepiece by Allora & Calzadilla, to the twinkling lights of (literally) ‘Forever’ by Tim Noble & Sue Webster, almost all the disparate works were double acts.

And this playful approach continued in Room II where Gilbert & George’s ‘Beard Aware’ (above), a entire-wall-sized multi-panel photographic work that looks very much like most Gilbert & George works loomed over a sorry pile of charred bones on a low white plinth. 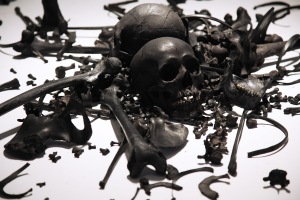 The only thing that bothered me about Zatorski + Zatorski’s work (right) – which I really rather enjoyed as a typically unsubtle post-modern momento mori – was that it’s title, ‘Self Portrait as Charcoal on Paper’, suggested that the bones belonged to the artists, which could not be true as they must still be alive to have arranged said bones so beautifully.  Perhaps in this case the title was not meant to be taken so literally. 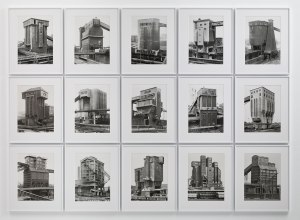 The Small Weston Room, usually given over the the small and charming public entries, was this year the showcase for one of the twentieth century’s original Artistic Duos, Bernd & Hilla Becher.  They were represented by five of their classic series of photographs documenting water towers, gas cylinders, cooling towers and stone works in Germany’s industrial Ruhr and beyond.  The apparently abandoned structures stand as monuments to a declining industrial powerhouse, similar to the ‘Atomgrad’ pictures in their haunting and melancholy stillness.

Jock Mcfadyen’s Room IV was something to do with nature.  In fact what struck me was the repetition of charred remains (of nature).  David Mach’s ‘Dark Matter’ and David Nash’s ‘Big Black’ (right) dominated the room, the one charred wood punctuated with screws (in the voluptuously sculptural form of a Henry Moore reclining nude crossed by a morbid Yayoi Kusama), the other a monolithic charred redwood fragment, still imposing even post-cremation.   These were in curiously apt juxtaposition with Colin Watson’s lovely little oils of Great Tits, recently expired.

As ever, I enjoyed the print rooms; though more subtle than many other works the range of technical experimentation is fabulous.  I was less impressed that the ‘featured’ exhibit here was a potato print.  Yes, it harks back to a primitive childish urge to creativity, but the Royal Academy is supposed to represent the highest achievements in artistic endeavour, not primary school play-time. 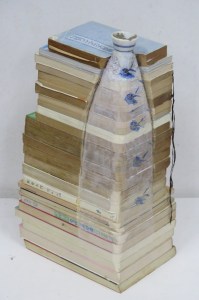 Further on, Jock McFadyen’s ‘Pink Flats’ (above) and Paul Crook’s ‘Yellow Flats’ were a colourful counterpoint to Aono Fumiaki’s ‘Mending, Restoration-‘ and ‘Mending, Substitution, Consolidation, Coupling-‘, a series of fragmented objects rescued from the East Japan earthquake and tsunami in 2012 and combined with other materials such as plywood, books and acrylic to form a new, complete sculptural object (left).  Both spoke in different ways of destruction and reconstruction in an urban context, and were accompanied by other comments on similar theme: Adam Fowler’s

The Lecture Room made a superb Sculpture Gallery, the walls lined with shelves to show the smaller works like a bizarre curiosity shop.  It was a relief for the eyes to rest on Anish Kapoor’s smooth pale alabaster sculpture amidst all the confusion.  Also Tim Shaw’s sprightly little bronze Dancers on Balls (no.VI above).

Unfortunately, out in the courtyard Ron Arad’s ‘Spyre’ (below), which had promised ‘unpredictable acrobatic postures’, did not seem to have shifted an inch.  Perhaps we had missed the show. 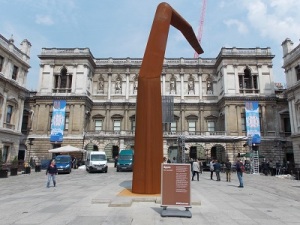