Frank Auerbach’s early work is surprisingly sculptural. Even the charcoal portraits are rubbed back and reworked, torn, patched and built up again (‘Self-Portrait’, 1958, right).  The oil paintings in this first gallery are literally three-dimensional – relief sculptures within a box frame – the peaks and troughs of paint like an angry sea, coalescing into figural forms only when one steps back and allows the surface to flatten out. 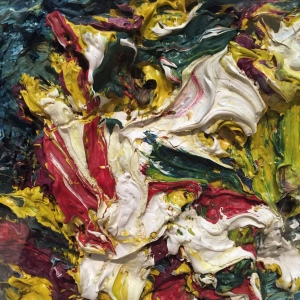 ‘E.O.W. Reclining Head II’ (1966, left and below) is a case in point; the paint swirls and sets hard across an invisible canvas like royal icing in plasticine colours. There is a very physical quality to these paintings, almost aggressively so; the jagged edges suggest that the paint has been moulded into these forms by hand, the primary colours run like harsh scars across the sitter’s cheek.

Another, ‘E.O.W.: Half-Length Nude’ (1958, right), positively drips with pigment, the livid red and white tempered by a swamp-like greeny beige.  These late 1950s and 1960s works are already much brighter than those of the early 50s; paintings such as ‘Building Site, Earls Court’ (1953, below), which is so dark as to be barely legible, is described by Barnaby Wright (who curated ‘Frank Auerbach: London Building Sites 1952-62’ at the Courtauld Gallery in 2009-10): “Auerbach’s restless reworking of the subject resulted in expanses of thickly massed paint, its skin dried to a deeply wrinkled and puckered surface.  It is as if the paint has consumed almost all vestiges of the image itself.”  As the portraits become brighter, so do the cityscapes, revealing an angular, geometric framework of rigid lines so tactile that the paint almost becomes scaffolding (‘Mornington Crescent’, 1965, below). 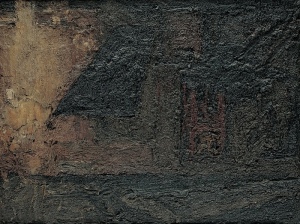 Auerbach’s working method is intense and drawn-out.  He paints over each day’s work time and again until something “seems to lock like a theorem”.  The late 60s brought a radical change, however, as he began to scrape down the picture before his next attempt, leaving the picture surface flatter and allowing the brushstrokes to appear more spontaneous.  ‘The Origin of the Great Bear’ (1967-8, below) shows this new freedom and fluidity of line, the sheer enjoyment in the very substance of the paint.

As the exhibition progresses swiftly through the decades one begins to recognise the features of Auerbach’s favourite models (E.O.W., J.Y.M., Julia and Catherine Lampert – the exhibition’s curator – all appear repeatedly) despite their elusive features,

In contrast to the length of time each painting takes to complete, the end result expresses a fleeting moment, a sudden turn of the head, a chance encounter, a ray of sunlight through cloud… “It was normal for us to sit in a small room with no means. We wanted to say something profound and precise, something sharp about truth,” Auerbach recalls, “…to pin down an experience in its essential aspect before it disappears.” 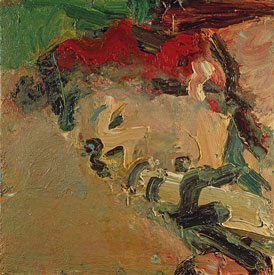 The later landscapes become ever more cheerful, almost Fauve, in colour and lose their early rigidity.  The contrast is all the greater as Auerbach has worked in the same studio since 1954 and has painted these same surroundings over the decades. In ‘Mornington Crescent – Early Morning’ (1991) the pink and blue buildings seem to lurch and sway as if they have lost their anchor.

In more recent years balance has been recovered, vertical lines pinning down the composition in ‘Hampstead Road – High Summer’ (2010, left) with its jogger caught mid-stride in the foreground.  Here in the penultimate gallery the charcoal drawings reappear, still a Giacometti-like palimpsest of lines rubbed back and layered, but lighter and more spidery, echoing the looser brushwork of the later oils (‘Self-Portrait II’, 2013, below right)

This is an unusual retrospective in that the artist has had a free hand in selecting the paintings to be exhibited in the first six chronologically arranged galleries – and for the fact that the curator, who has chosen the works in the final gallery to ‘resonate’ with these, herself appears as the subject of a number of the paintings. It is therefore quite a personal show about an artist grappling with his medium and his subject, by those who understand the intense nature of these struggles best. These last room gives a greater understanding of both Auerbach’s daily routine, with multiple images of the route to his studio, and his habit of working on a large and smaller canvas simultaneously.  There are also two small etchings by the exit which appear an afterthought, though in fact the artist is a talented and productive printmaker.  As Auerbach states in a text applied to the wall of the first gallery by way of introduction, his intention was that “each [picture] be considered as an absolute which works (or does not work) by itself”; in this sense it is a revelatory sequence of – some sublime – images.