It felt like wandering into a venue as a band was getting ready for a gig – too early, a few people hanging around kicking their heels.  One screen would light up, then another, showing empty rooms; a figure flitted from one room/screen to another, checking the equipment, quietly whistling the beginnings of a tune.  Then off again. A sense of anticipation built up; preparations were being carried out – but for what? 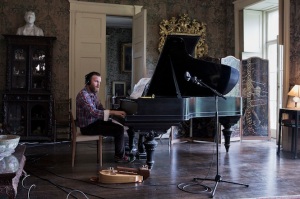 Then the screens lit up one by one, each revealing a different room and a different musician within the romantically bohemian Villa Rokeby in New York state.  A voice would sound from one, a string plucked in another, a refrain sung quietly elsewhere as the players tuned up.

The venue is the top floor of Brewer Street car park in Soho, blacked out and kitted up by The Vinyl Factory who are presenting this exhibition of Ragnar Kjartansson’s ‘The Visitors’, a ‘multi-screen audio-visual artwork’.  There are nine screens in total, seven around the walls and two back-to-back in the middle; as music sounds from each in turn, the crowd constantly shifts about to catch a glimpse of the next performer – it is impossible to see all at once.  The sound surrounds you, all-encompassing, homophonic, the imperfections – gentle chatter, shuffle of feet, a cough, a untuned note – creating an intimacy and involving you in the performance. 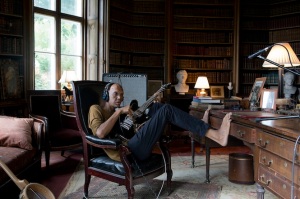 The music itself is haunting, melodic, the voices and instruments weave in and out, the tempo increasing and decreasing, it reaches a crescendo and then resets itself and begins again seemingly ad lib.  The same refrain repeats endlessly, melancholically, lovingly – each artist is isolated within their room/screen, absorbed in their own music but, linked to the rest by headphones, part of a synchronised collective whole.

Each exquisitely staged screen could be a video piece in its own right, photographically composed, the contained emotion of each musician on their own empty stage like a sparse psychological study, an artwork in motion.  There is a figure in the bath (Kjartansson himself) holding his guitar above the bubbles; there is 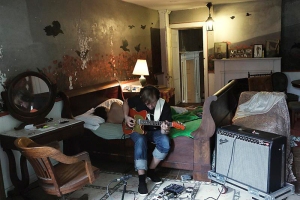 another impresario-esque sitting at a grand piano puffing at a cigar as he waits for his cue; another sits with his guitar on the edge of a bed with paint peeling off the walls and a sleeping form behind him; there’s a raven-haired accordionist in a flowing white dress and bare feet; and one screen shows the inhabitants (and backing singers) assembled outside on the verandah while two men play with a small cannon. 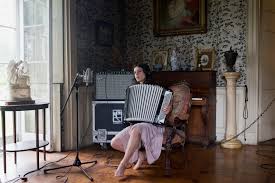 It is hypnotising, hard to walk away from, and despite its 64 minute duration you wish it would play on forever.  The music seems self-perpetuating, full of humanity, serendipitous, perfectly crafted but endearingly immediate, almost incidental.  As its melody fades away it reminds one of the transience of all such interaction, an

existence of fleeting moments of togetherness before we fracture and dissipate like the colourful patterns of a kaleidoscope.  The artwork’s title, ‘The Visitors’, then makes sense on many levels: the musicians are visitors to the house, we are visitors to their performance; the artist also ‘pays homage’ to ABBA’s last album of the same name, after which the band broke up, underlining the fragility of relationships.  This too feels wistful, though there is no narrative, and you leave feeling uplifted yet bereft. 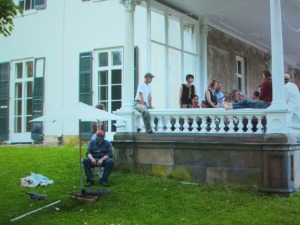