The Fabric of India exhibition at the V&A begins with a contrast.  Two contemporary Indian fashion designs – a dress covered in fluorescent silk and vinyl butterflies by Manish Arora and a houndstooth pattern ikat ‘office’ sari by Abraham & Thakoon (left) – are displayed on mannequins in front of a beautiful traditional block-printed cloth (above).  The show’s intentions are concisely stated: this is about the history, production and uses of Indian fabric – but equally about the relationship between the historical and contemporary, between artisans and artists, and between traditional and cutting edge.

The first gallery is a fascinating introduction – using a combination of raw materials, fabric samples, finished items of clothing, text and videos – to all the traditional methods used in the production of fabric in India.  We start with dyes (and, just as importantly, making them stick) and raw materials such as silk, where they come from and how they are extracted and woven; then there are methods of embellishment, with gold threads, beetle wings and mirrored pieces, printing, tie-dying and batik methods, and embroidery.  It is difficult to tally the extraordinary complexity and detail of the finished pieces with the simple explanation of the techniques employed, and demands a new respect and awe for the artistry of these anonymous artisan-producers.

The exhibition then considers cloth produced for religious purposes, the variety of temple hangings, flags and prayer mats reminding one of the religious diversity of India – and yet how, in their fabric hangings, Jains, Muslims and Hindus all had something in common.  In contrast there are the fabrics produced for secular purposes – the courtly textiles of Islamic sultans, Mughul emperors and Hindu rulers in the south.  Wall hangings depict flowers, animals and figural narratives – one long textile illustrating the progress of a battle looking rather similar in design to the Bayeux Tapestry (above) – though utterly different in technique. 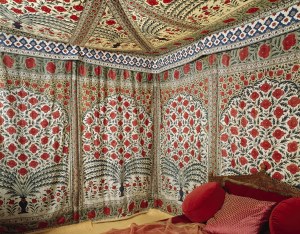 Here one began to get a sense of the influence that Indian fabrics had on European traders and, later, colonial officers and administrators: one of the long muslin gowns on display belonged to an Englishman, and an ‘India gown’ made of cotton is also recorded by Pepys in his diary.  However it is Tipu Sultan’s tent that dominates the gallery, splendidly draped from the ceiling and stretching around two sides of the wall, cocooning one in its mesmeric printed patterns of stylised palms and flowers (above right).

The international spread of India’s reputation for exquisite fabrics is charted in the next room; early fragments have been unearthed in Egypt and China, while by the 18th century they were exported to Thailand, Indonesia, Japan, Africa (and thence to America via slave trade routes) – and of course Europe.  The different tastes and cultures of each destination were catered to and the differences are fascinating.  The origins of handkerchiefs and bandannas, chintzes and pashminas, pyjamas and sprigged muslins all become clear.  As Avalon Fotheringham writes in the catalogue, ‘the all-American bandannas we now associate with everything from the Wild West to inner-city gang violence are the direct successors’ to the Bengali handkerchiefs that America was ordering in quantities as early as 1800.

The Industrial Revolution in Britain disrupted India’s preeminence as a producer of cloth with new machines and factories entailing cheaper and quicker production at home, though the cloth was still exported to India for embellishment.  This inevitably led to protests – Gandhi promoting the plain ‘khadi’ cloth to symbolic status – and eventually to modernisation.  The following display brings us up to date, with both cinema and fashion promoting traditional techniques and thereby enacting  a reconciliation between old and new in an ever more globalised and consumerist world.  There is an astonishing Bollywood costume from ‘Devdas’ (above left, 2002), so encrusted with gold sequins and mirrors that is looks like a sculpture in precious stones – apparently too heavy to dance in, even the mannequin had to be specially supported. 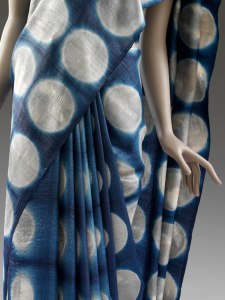 Alongside this is Brigitta Singh’s Mughul style quilted coat (2014), block-printed with flowers that echo the cloth which introduced the show; Aziz Khatri’s ‘Ant Scarf’ updates such traditional techniques as tie-dye with abstract artistic designs inspired by nature, as do People Tree, a collective based in New Delhi with their popular ‘Disappearing Tiger’ design T-Shirt.  Meanwhile international fashion designers such as Azzedine Alaia and Isabel Marant have collaborated with Maximiliano Modesti, who founded Les Ateliers 2M in Mumbai, specialising in hand-crafted decoration for luxury brands, famously working on Lady Gaga’s 2015 Oscars outfit by Alaia and the intricate embroidery on Hermes’ ‘Cavalcadour Fleuri’ shawl.

But it is not all purely commercial; contemporary art in India has also begun to adopt these textile skills.  As the introductory panel points out, textiles as pure art – dissociated form their traditional purpose – are a new phenomenon, but in helping to revive traditional artisanal skills they also provoke a reevaluation of such techniques. Meanwhile Indian designers are experimenting with new technologies such as digital printing – the ‘Ajrakh’ Jacket (left, 2010) designed by Rajesh Pratap Singh uses a digital ‘skull’ print on linen, combining the hand-made with the high-tech. There is also a playful approach to incorporating motifs from pop culture, adapting traditional forms, weaving and printing processes to bring them subversively up to date – for instance the Khatri brothers’ clamp dyed silk ‘Moon sari’ (above right) and Kallol Datta’s ‘suicide print’ sari.  The designs are at once beautiful and interesting in a cultural sense; the exhibition is both an education and a visual delight.