The Photographers’ Gallery is holding its annual exhibition of the shortlisted contenders for the Deutsche Borse Photography Prize – one of the most prestigious international awards given to a living photographer for a specific body of work.  It’s an impressive line-up this year.  Pure photography forms the core of each individual exhibition (as opposed to the press clippings, video or GPS images that have dominated in past years), with each distinguished by a strong topicality or visual concept and a different style of presentation, bringing in video, text and other modes of display to great effect. 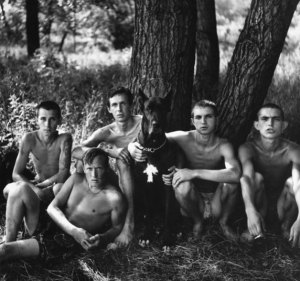 Nikolai Bakharev’s ‘Relation’ series were taken in Russia in the late 1980s and early 1990s when it was still forbidden to photograph nudity.  He pushed the boundaries of this censorship by approaching holidaymakers at public beaches, and in doing so has created a touching psychological portrait of a people at a certain place and time.  The photographs also reveal specific personal relationships, from the shy awkward youths to long-married couples, to fathers and sons, all captured in this strange dislocated context of semi-nakedness by the beach.  The images are small – little bigger than snapshots – and capture moments of intimacy that seem almost voyeuristic. 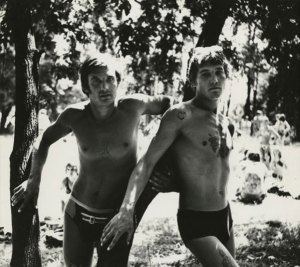 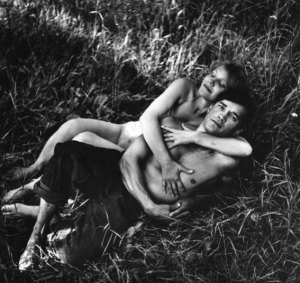 Zanele Muholi’s work, ‘Faces and Phases 2006-2014’, is far more overtly political.  She is actively using her art to campaign for the rights of the LGBTI community in South Africa, where there is still widespread abuse and violence towards them.

This message is powerfully put across in the wall full of unframed black and white portraits, stark yet full of pathos, and accompanied by written testimonies.

Also working in South Africa, Mikhail Subotzky and Patrick Waterhouse’s project takes a very different approach.  With an equal interest in social inequalities, their investigation ‘Ponte City’ takes a broader time period and a narrower focus: the eponymous tower block was built in Johannesburg in 1976 for the white elite but by the 1990s was a refuge for immigrants and a beacon of urban decay and illegal activities.

The artists build up a picture of the community living within this notorious building by systematically photographing the doors and the views from the windows of each apartment at the same scale and angle.  These images are displayed in tall light boxes reaching up to the gallery ceilings which give the impression of seeing the tower block itself lit up from a distance. 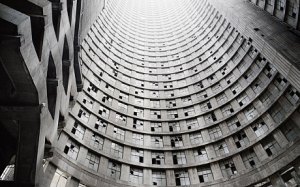 On the walls alongside, abandoned, squalid interiors are depicted, with found snapshots of the previous tenants in these same rooms pinned or superimposed on top.  Another wall features architectural plans, handwritten statements and visa application forms, knitting together a web of the many individual lives played out within this structure.

The fourth shortlisted photographer is Viviane Sassen.  Her work, collectively entitled ‘Umbra’, is in contrast predominantly abstract, though figures and landscapes do play a part in some images.

Colour predominates, which is a shock to the senses after the monochrome or low key tones of the previous galleries.  But the key to the works is shadow (‘umbra’) which silhouettes forms starkly against strong light, creating not only an almost sculptural aesthetic contrast but also a less direct, but no less powerful, sense of foreboding.  Embodying fear, the unknown, the ‘shadow of death’, the pictures encroach on our subconscious selves and become quite unsettling – a feeling heightened by the hypnotic background soundtrack of recited poetry.

Sassen’s images do not, however, seem to me to form any cohesive narrative; some are about colour and depth, others the shadowy presence, some are abstract, others figural.  Essentially each stands alone so that as a body of work this seems less successful.  In my view, the ‘simpler’ the story, the more powerful the photographic ensemble – and as some of these photographers show, the ‘simple’ premise in no way lessens the subtlety of perception or force of visual impact.  Quite the opposite.