In their monochrome, angular formality many of the photographs on display at Tate St Ives closely echo the building itself, and their abstracting of everyday items and natural forms complements the hypnotic rhythm of the waves seen through the vast convex window at its epicentre.  Beyond that, though, what binds them to this small Cornish town?  The curatorial thesis comes from the international modernist element that were drawn to St Ives from the 1920s through to the 1960s by figures such as Ben Nicholson, Barbara Hepworth and Bernard Leach.  They have extended this idea to explore the global reach of modernist photography – and in doing so have uncovered a great many artists whose names should be better known.

South America is the focus of the first gallery; now re-emerging on the contemporary art scene, it is easy to forget that this continent was a centre of artistic innovation in the mid 20th century.  The Tate has done much to put this right, with a recent retrospective of the work of Helio Oiticica at Tate Modern; here Oiticica’s ‘Metaesquema’ (1957, above)  as well as abstract works by Lygia Clark are set alongside the photography of Thomas Farkas, Sameer Makarius, Gaspar Gasparian and Geraldo de Barros. 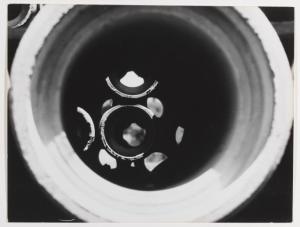 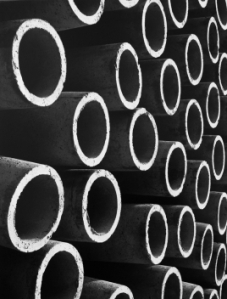 The play of geometric forms in Makarian’s ‘Vision of Pipes through a Pipe’ (1957, above) and Gasparian’s use of the same motif (left), or in Geraldo de Barros’s ‘Untitled (Telegraph Wires)’ (below left) and rooftops in ‘Granada’ from the early 1950s (below right), abstracts the everyday, using close-up shots, cropping and bird’s-eye views to decontextualise the subject, forcing the focus onto pure line and structure.

Oiticica’s work meets their aesthetic halfway; the exacting geometry of previous abstract painting is destabilised, the shapes jostle to get out of their grid with the unpredictability of a dry stone wall.  Eventually the Neo-Concrete movement would bring back the sensuality that the robotic abstraction of Suprematism had lost. 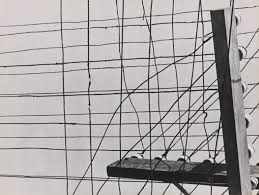 Next, one follows a corridor/balcony down which a series of tiny photographs, collectively entitled ‘Objects Reacting Poetically’ (1931-6), are arrayed in a line.  These are the result of a walk taken by Charlotte Perriand, Pierre Jeanneret and Fernand Leger in which ‘the marvellous in the everyday’ was captured in images of surrealist ‘found objects’.  Amidst these, a more performative, time-based element comes into play in images of a block of ice held up against the light by alternating artists, gradually melting (below).

In the gallery below, against the splendid view across the bay, Claude Cahun’s photographs continue the exploration of the key role that surrealism played in modernist photography.  In contrast to surrealists such as Man Ray or to many other of the pioneers exhibited in this exhibition, her technique is secondary to the performative and the incongruous.  She seems to me most akin to Eileen Agar, whose collaged combinations of suggestive objects found in nature with the human and the humorous are echoed in bizarre theatrical tableaux.

Cahun often used her own body – as in ‘I Extend my Arms’ (1931/2, right) – most famously in self-portraits that question gender identity and the idea of ‘womanliness as a masquerade’ (anticipating Cindy Sherman by over half a century).  The still lifes of dolls or ethnographic artefacts, meanwhile, employ an anthropomorphism that is unsettling, the elements waiting only for the camera’s eye to turn away before starting back to life.

From the surrealist branch of modernism we turn to its opposite, the functionalist, rational modernism of the Bauhaus.  Here, technique regains its position of pre-eminence.  Laszlo Moholy-Nagy experiments with the photogram, while Josef Albers’ preliminary class, ‘Material Studies’, encouraged students to explore the properties of various materials and to photograph the resulting constructions – a perfect illustration of the Bauhaus ethos for unity between the arts.  The Argentinian photographer, Horacio Coppola, studied at the Bauhaus under Walter Peterhans in the 1930s, producing carefully constructed images of everyday objects such as ‘Egg and Twine’ (1932, below), chosen for their pared-down, abstract forms.

In this way the influence of Bauhaus modernism spread far and wide, from Argentina to Japan; Iwao Yamawaki was another student there in the 1930s who benefitted from the training in space, material and construction, producing austerely beautiful compositions from simple objects – for instance ‘Set of Bowls’ (1930-32, below left).

Yamawaki also specialised in architectural photography akin to Rodchenko’s ‘constructivist’ aesthetic of close cropping and sharp angles.  Among the other photographers represented in the Japanese gallery are Kiyohiko Komura, whose close-up and technically manipulated images of the female body simplify his subject matter into formal arrangements of light and shadow, as in ‘2 Abstract Forms’ (c.1950, below).

And Shikanosuke Yagaki, whose images of blurred light and momentary shadows or reflections epitomise the Japanese aesthetic of ‘wabi-sabi’ – defined by the curators as ’embracing transience and imperfection – a fleeting beauty’.  Illustrated by prints such as ‘Puddle on Pavement’ (1930, below), this appears a concept synonymous with the ‘decisive moment’ of Henri Cartier-Bresson, and with similarly captivating results.

Moholy-Nagy played a leading part in the Bauhaus, so it is perhaps not surprising that his brand of modernism made a strong impression in Hungary.  The penultimate gallery focuses on some of the lesser known exponents.  Fusing the surreal and the formal/technical strands of modernism, Gyula Holics stages scenes of mundane objects – a pair of spectacles for instance (‘Glasses and Shadow’, c.1955, below) – whose dramatic lighting and intense, claustrophobic perspective  give them a nightmarish quality.

Nearby, Georgy Kepes takes the photogram to a new level of invention and ingenuity, playing with light to create intangible echoes of the exquisite form and tension of the Barbara Hepworth sculpture displayed in the centre of the gallery in ‘Leaf and Prism’ (1938, below).  Or impelling a compass and tea strainer to dance as if animated in a Man Ray movie (below right).

The final gallery is dedicated to Harry Callaghan. Though Callahan seems an anomaly in many respects, he also ties together some of the threads that run through this exhibition – as well as being linked to that key figure, Laszlo Moholy-Nagy, with whom he worked at the Institute of Design in Chicago. 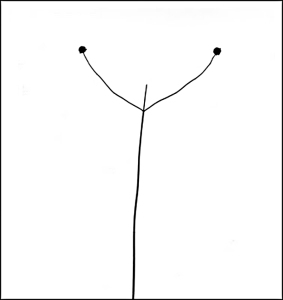 Nature is abstracted, so that it approaches the effortless pen strokes of a Picasso or Miro sketch (left); the human body becomes an an interplay of light and shadow, formalised yet manifestly sensuous.  Technically, Callahan was an innovator in both black and white photography and in colour – and the deliciously saturated colour dye transfer prints, such as ‘Chicago’ (1951, below), in concluding the show also stand as an indication of modernism’s next move… 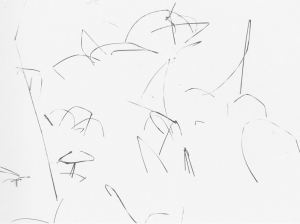 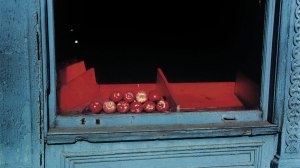