Modernism, and its British manifestation especially, is much disputed still. The movement is positioned vaguely in the late nineteenth and early twentieth centuries; the influencing factors identified as industrialisation, urbanisation, and increasing aesthetic introspection. The modern in art has generally been associated with the breakdown of the Western tradition of art mirroring nature – a tendency that appeared concurrently with the rise of nationalism in Europe. The Impressionists started to fragment their brushstrokes and give priority to atmospheric effect just as Italy and Germany formed nation states; and so, as the Serbs demanded independence and the Austrian Empire teetered on the brink of shattering into its component ethnic groups, Cubism flourished and Kandinsky claimed to have reached true abstraction in painting. But Britain stood apart both from the cutting edge of European modernism in its move towards abstraction and from the radical redrawing of national boundaries. Yet British art during the early twentieth century was certainly not lacking in dynamism. British Modernism, therefore, demands a different interpretation to the wider movement, rooted as it is in the traditions, society, history and culture of Britain as an independent nation. Art reacts to political events or social conditions, but reacts in a way consummate with the national character. Thus it seems entirely appropriate that following the horror of the First World War and the accompanying disillusionment experienced by those who survived it, the British sense of humour should prevail. Accompanied, of course, by a quiet celebration of the enduring British landscape. In a subtle manner, as is customary to the British disposition, these were the means by which British Modernism made its subversive voice known in the years immediately following the war.

Douglas Goldring, assessing the attitude of young British artists in the 1920s, concluded that the hostility of public and press bred in them ‘an affected arrogance, which is an inevitable result of real or imagined “persecution”’ – and this led to a ‘vein of mordant satire.’  Those whose careers had been cruelly interrupted by the war – such as Wyndham Lewis, once leader of the radical Vorticist movement, left artistically isolated in the Twenties – were understandably disaffected and their paintings appear hard-edged, tainted with bitterness [Lewis, ‘Tyros (A Reading of Ovid)’, 1920-1, left]. However, the satirical strain of modernism developed beyond this initial reaction, younger artists picking up its thread and creating modernist satirical works that were light-hearted and mocking – and, most importantly, radically contemporary in their style, technique and topical subject matter. Satire’s traditional function is a moralistic one, the correction of social vices through ridicule; in the context of the 1920s, when accepted moral values were being challenged and rejected, leaving codes of behaviour uncertain, satire was a weapon of moral ‘rearmament’, an undermining of punitive censorship and political cant. Satire in this sense counterbalanced with ridicule the mood of fear and mistrust that permeated the post-war years.

It cannot be claimed that a comparable climate of fear or instability exists today; however, the mode of satire has persisted within British art, mutating to address the prevalent issues of each subsequent generation. And it seems to be making a quiet but marked renaissance among contemporary British artists. Where once the cinema and jazz music were considered dangerously decadent, a modern ‘opiate of the people’, today these anxieties are directed towards the internet and technology advancing beyond our control, by the unseen yet ubiquitous threat of jihadists and drones. In response, a number of artists have chosen to address these issues by using the traditional forms of painting and drawing to make a satirical comment on today’s society.

Edward Burra came of age in the early 1920s, the war a constant backdrop to his otherwise quiet middle-class upbringing at Springfield, Rye. His work from this decade draws on the muted dissent of modernist satire – indeed his friend and mentor Paul Nash dubbed him ‘the modern Hogarth’.  His paintings are concerned with the surface of things, detached from their subject matter, depicting a false gaity that masks – both literally and metaphorically – a seriousness and anxiety so ubiquitous that it was, consequently, deeply unfashionable [Burra, ‘Minuit Chanson’, 1931, above]. Burra’s work is determinedly awkward to classify – a fact he no doubt revelled in – and this may go some way to explain why he has been for so long overlooked as a important figure in British modernism.

As Jane Stevenson argues, Burra is ‘a considerable complication in the story of English modernism’, a far cry from those modernist icons such as Ben Nicholson who were neo-classical ‘in the sense of being restrained, cerebral and strongly dependent on design’; she describes Burra in contrast as a ‘baroque modernist’ [Burra, ‘Dockside Cafe, Marseilles’, 1929, left; and ‘Harlem’, 1934, below right]. This terminology is a useful way to approach British Modernism as it bifurcates, describing more than simply the figurative versus the abstract, or design versus narrative. The term ‘baroque’ hints at the anti-classical elements of humour and bad taste, as well as a new focus on modern urban life, that Burra’s works embodies. Attempts were made to involve him with British Surrealism – Paul Nash encouraged him to join Unit One in 1933 and Burra showed with the British Surrealists in 1936;

but on a wider European basis, Burra’s work seems to correspond better in style, subject matter and socio-analytical purpose to the New Objectivity movement in Germany in the Twenties. The title New Objectivity (or Neue Sachlichkeit) suggests an anti-metaphysical and anti-romanticist mentality, a matter-of-factness, and its characteristics have been variously defined as a sharp focus, inexpressive brushwork, unified and undramatic lighting, and often an unnaturally close standpoint; Richard McCormick describes it as ‘a “sober” and unsentimental embrace of urban modernity’, open to ‘modernity and mass culture.’  New Objectivity – and its best-known representatives such as Otto Dix and Georg Grosz – has come to symbolise in visual terms the culture of Weimar Berlin. Burra’s use of similar tropes to represent the popular culture of post-war London, Marseille or Toulon should therefore be valued more highly as a critical modernist statement. 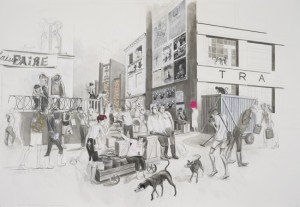 Charles Avery is one contemporary artist working in Britain who has inherited this legacy of British Surrealism and New Objectivity-influenced artists such as Burra [Avery, ‘Untitled (Expedition)’, 2012, above, and ‘Ceci nest pas un Bar’, below; Burra, ‘Funfair’, 1928-9, right]. He works predominantly in pencil with splashes of colour; his scenes from the lives of ‘The Islanders’, an ongoing project, portray frozen moments in a parallel society, the narrative ambiguous. An early review describes his ‘anachronistic style of drawing’, with its air of detachment and irony that signal it as a satire.

Though ‘The Islanders’ project depicts a fictional and allegorical world, its similarities to our own give its subtle satire a force akin to Burra’s, while the moral aspect suggested by the allegorical ‘history’ of the Island provided by the artist is an essential element of all satire. The characters embody various principles and propositions, not caricatures but philosophical types – in the same way that Aldous Huxley’s characters in his early satires represent different intellectual points of view. In this way Avery combines the surreal and the real of an easily recognisable contemporary reality that provokes a very British self-deprecatory humour. It is an approach deeply rooted in the painting of Burra or William Roberts, and the writing of Evelyn Waugh, Aldous Huxley or Anthony Powell in the 1920s.

Meanwhile, Avery also inherits some of the theatrical zest of Cecil Beaton and Stephen Tennant. In the eccentric fashions and the figures’ placement within scenery that resembles stage set designs, a parallel reality is created that echoes back our fetishes and foibles, making them utterly ridiculous. Rex Whistler, a friend and contemporary of the Beaton/Tennant coterie and the same age as Burra, achieved a similar effect.   In his mural for the Tate Restaurant, ‘In Pursuit of Rare Meats’ (1926-7) and in his double portrait of the Dudley Ward sisters [1933, below], for example, he uses the classical landscape backdrop of a Claude Lorrain painting, then inserts comedic or incongruous characters, both contemporary (in the case of the sisters) and entirely fictional (the caricature of a black servant who seems to belong to a Firbankian world of fantasy and innuendo). Like Avery, whose own name appears on the door in ‘Avatars’ [2005, above right], Whistler is sometimes tempted to portray himself in his imaginary world – here in the guise of a satyr spouting water from a Watteau-esque fountain, leering with unashamed desire at the beautiful Penelope Dudley Ward.

Whistler’s incongruous insertion of elements of modernity into the idealised landscapes of Claude is also echoed by Ged Quinn. Born in 1963, Quinn grew up during a period of intense technological progress that was in many ways as disorientating as the twenties must have seemed. Such inventions intrude on his peaceful landscapes with an absurdity that underpins the humour of satire.

In ‘The Fall’ [2006, left] the figure of Antonin Artaud falls from the sky like Icarus or Lucifer, hurtling towards the burnt out remains of Edison’s ‘Black Maria’, the first ever movie production studio, looking forlorn and vulnerable next to the majestic classical ruins that loom over it. Similarly, in ‘Dreams of Peace and Love Gradually Giving Way’ [2006, below right] a makeshift cinema has been constructed in another Claudian landscape, with a spacecraft from Stanley Kubrick’s ‘2001: A Space Odyssey’ floating on a raft. 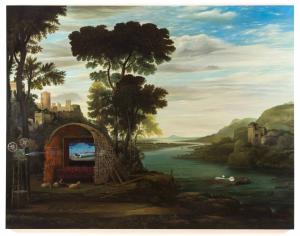 The flotsam of defunct technology? A mockery of human striving? As Whistler’s characters frolic and picnic extravagantly in a historical landscape that does not belong to them, so Quinn’s figures and structures find themselves stranded in romantic paintings, forlorn and ineffectual. In both cases, the contemporary insertions subvert the traditional British landscape tradition, and, out of context, are simultaneously rendered ludicrous.

The British sense of humour was tainted by disillusionment in the 1920s and, in combination with an intelligent and incisive analysis of contemporary society, created a new form of visual and written satire. In today’s art, the same attitude of cynicism and caustic wit, sophisticated yet anarchic, is clearly present. And not only in the artworks themselves but also in the elaborate hoaxes that send up the art world itself. In 1929, Brian Howard, together with John Banting and Bryan and Diana Guinness, organised an exhibition by a mysterious artist named Bruno Hat, duping the critics with their ironic synthetic cubist compositions in distinctive rope frames [below]; in 1998 the writer William Boyd, along with David Bowie, Gore Vidal, Karen Wright and John Richardson presented a hoax biography of an abstract expressionist artist named Nat Tate.

One could also claim that the work of street artists like Banksy are contemporary satires. The works themselves highlight essentially serious issues such as racism, war or police violence in a witty and amusing manner; but what’s more, the fact that the originals are painted onto public structures simultaneously undermines the position of the art gallery as well as questioning the value or ownership of a work of art. Graffiti images of the Mona Lisa with a rocket launcher or the grieving Madonna figures in ‘Sale Ends Today’ [2006, below] are a perfect example of the British modernist legacy: an appreciation of our artistic heritage in incongruous juxtaposition with contemporary symbolism, and a dash of mischievous and often inflammatory wit. Very British – and still bang up to date. 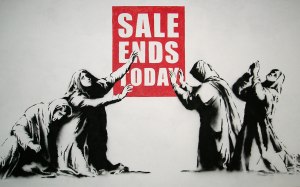