Had I not had an afternoon of leisure and a Tate card in my pocket I may well have missed the Tate Modern’s retrospective of Sigmar Polke altogether.  Polke is an artist I hitherto knew nothing about.  I entered the exhibition unburdened by preconceptions and was immediately beguiled, diverted, and engaged by an artist who through five decades continued to experiment and challenge the very fundamentals of art in a manner both humorous and deeply probing. 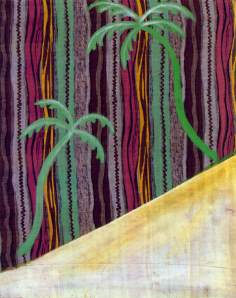 He began in a pop art style; but while the movement may have been a playful jibe at consumerist culture, in Polke’s case it also strikes a more serious note, signalling the extreme material differences between West and East Germany in the sixties.  ‘Plastik-Wannen’ (above, 1964) is a typical example of Polke’s use of advertising imagery as high art, denuded of its slogans and transferred to a large scale canvas format.  However, at a deeper level, the curators attribute a symbolic meaning to the images of bath tubs and soap, one of Nazi atrocities and a desire to ‘wash away history’.

The everyday was more literally incorporated into Polke’s work when he started using decorative fabrics in place of canvas – as in ‘Two Palm Trees’ (above right, 1964).  This served both Pop Art’s satirical purpose and Polke’s own interest in jarring juxtapositions between materials and motifs.  He continued to use this technique for many decades to come, using children’s blankets for a series of Heron paintings in the 1970s and as backdrop to several works in his ‘Watchtower’ series in the 1980s. 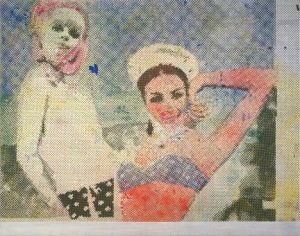 Meanwhile Polke’s Pop influence turned from Warhol towards Lichtenstein, as he became increasingly interested in the construction of printed media images and the effects of blowing these up to a large scale.  However Polke shuns text, leaving his ‘raster’ images ambiguous – the more so as they also remain messy and painterly, full of ink blots and human error, as in ‘Girlfriends’ (left, 1965-6).

In the 1970s Polke lived the hippy life.  He lived communally in the German countryside, producing numerous collaborative works (of which there are a series of collages exhibited), experimenting with drugs and dressing up in python skins.  More importantly this decade saw him experimenting with photography and film, layering and hand colouring images – as in ‘Untitled (Mushroom)’ (right, 1975) – or deliberately spilling and smudging the chemicals to create a hazy, fragmentary effect.  Polke also travelled extensively during these years and the new cultures and visual stimuli combine with his innovative approach in photographs such as ‘Bowery, New York’ (below top, 1973) and ‘Quetta, Pakistan’ (below bottom, 1974-8). 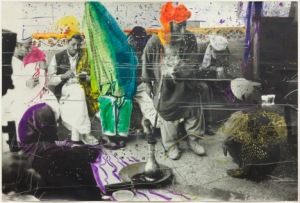 Polke’s experimentation with materials became ever more abstract.  His sketchbooks show him playing with the simple idea of Rorschach inkblots, as in ‘Untitled (Rorschach)’ (below, 1999), as well as with different pigments, liquids and combinations of media such as graphite, lacquer and resin.  Meanwhile he also started to coat his ever larger polyester canvases with resin so that they became transparent, the stretcher behind showing through, complicating and challenging the viewer’s perception of back and front or surface and depth.

In the ‘Watchtower’ series, created between 1984 and 1988 (left and below right), Polke combined a simplified motif with material, chromatic and chemical explorations.  Printed fabrics in jaunty patterns jar with the brooding symbolism of the watchtower, unstable photographic chemicals continue to steadily obscure the image over time, and a bubble wrap surface creates a strangely ethereal and vulnerable image like the fading moments of an unsettling dream.

Of the vast wall-sized showstoppers in the final galleries I loved ‘Mrs Autumn and her Two Daughters’ (below, 1991).  The 19th century illustrations by Grandeville are caught up in a blanket of white acrylic snow, the semi-tranlucent canvas behind like the thick cloud from which crystallised resin flakes form on the surface of the canvas.  The snow is not just depicted but literally created. 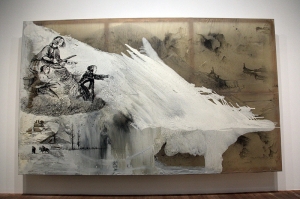 The later works flit from one idea to another with a creative energy that, while arbitrary, never fails to engage – and entertain.  I constantly felt impelled to peer up close to clarify the technique and then to stand right back to take in the whole effect.  During the very last years of his life Polke was still testing out new technologies within his work, creating hand-made lenses to layer over layers of images for optical effect.  Perhaps it was his ceaseless pushing of boundaries and hyperactive desire to experiment that has made him a difficult artist to understand, let alone classify.  But I can’t wait to feast my eyes again.