Caro’s last sculptures (a selection of them at least) bask under the sunlight that streams into the Annely Juda gallery.  The weighty steel looks comfortable there – sometimes elegantly crumpled, sometimes rigidly assertive, always skilfully composed.  And now there is added to this solidity the electric glow of vivid perspex panels: love it or hate it this innovative insertion revivifies the typically Caro-esque steel constructions.  This is what is so disconcerting – the energy and inventiveness proclaim an artist at the peak of his career, while the title, ‘The Last Sculptures’, asserts otherwise.  One expects an artist at the end of his life to produce a kind of ‘summing up’ of his oeuvre, to revisit his earlier career, or indeed to lurch in an entirely new and inadvisable direction as if regretting the roads not taken. Caro’s work seems as fresh aged 89 as it did when he first brought his abstract compositions onto the gallery floor in the early 1960s. 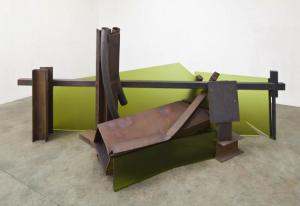 In my opinion, some work and some don’t.  The most successful are those which use colourless perspex – either clear or opaque – resulting in interesting effects that trick the eye and that work with the industrial materials in an aesthetic dialogue.  The brightly coloured pieces often seem facile intrusions into an otherwise dignified and well-balanced piece.  The shapes of the panels sometimes appear totally arbitrary, lacking the gravitas of steel with its intimations of past functionality. 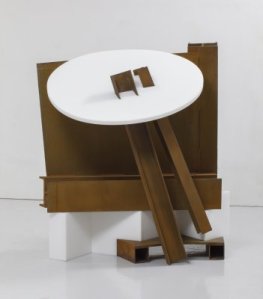 ‘Spin’ (above, 2013) juxtaposes rusted steel and opaque white perspex, creating a gratifying contrast of colour and texture with the simplest of forms. The perspex could be marble or candle wax; it is the purity in opposition to the corrupted steel – like an explosion of a derelict warehouse and a smart coffee shop.  Not far away ‘The Eye Knows’ (below, 2013), unlike the modest ‘Spin’, stands over two metres high.  It resembles an part of an industrial plant or a public urinal, deconstructed, the pipes leading nowhere;  through the middle slices a sheet of transparent perspex.  This really makes the piece, acting like a mirror but not reflecting quite the right forms, or leaving gaps where they shouldn’t be, playing tricks of perception with the eye.

Opposite, ‘Terminus’ just misses what these pieces achieve so well.  The red perspex sheet that runs through the centre of the construction recalls the horizontal red form of the iconic ‘Early One Morning’ (1962), yet here it is it just garish – as are the scarlet bespattered steel elements supporting it – and it also lacks any dynamism.  It is static, sluggish, pinned down by the railway sleeper above.

Upstairs there is a meditative arrangement of ship’s capstans and a bell-shaped perfume distiller salvaged from the South of France; the low bulbous shapes of the rusted steel and greenish copper in ‘Bollards’ (above, 2012-13) need something to lift them into life – but the brown-tinged perspex only manages to look like a cheap coffee table hiding amongst them.  Nearby, ‘Autumn Rhapsody’ (2011-12) gains momentum with its circular metallic sweep climbing upwards like Tatlin’s tower, then crumpled sheets of steel appear quite another substance altogether, denying the rigidity and functionality of the material.  Unfortunately the flat planes of perspex here, which might have worked as a counterpoint, are such an acidic neon yellow that it puts one’s teeth on edge and clashes in a particularly disagreeable way with the beige-khaki colour of the steel.

‘Card Game’ (above, 2011-12) combines all the most successful elements of this series (which may be why it gets a small room all to itself).  The tenderly crumpled steel against the rectilinear frame of the table structure; the rusted metal against the transparent perspex, which reflects and teases, complementing and enlivening its steel counterpart.  It is based on Cezanne’s ‘Card Players’ in the Courtauld Gallery, and you can certainly read into it the hunched figures sitting around a table – but it is almost more rewarding not to impose this narrative onto it, to simply appreciate the beauty of the assembled parts and admire the work of a master.