Kenneth Clark undoubtedly holds an important place in the development of British art in the twentieth century. There have been plenty of opportunities to admire the work of those artists he supported and encouraged – especially since many of them went on to become official war artists during the Second World War (Clark being in charge of the War Artists Advisory Committee, with an empty National Gallery at his disposal to show their work).  However, the idea of an exhibition devoted to a modern patron and collector was new to me; would this approach work, or would the eclectic taste and the vagaries of life of its protagonist result in a rather loosely related collection of art? 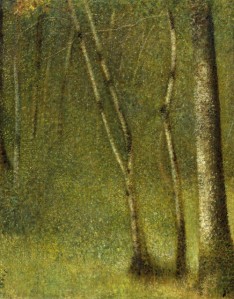 Eclectic it certainly seemed throughout the first two rooms indicating his early influences and his personal collection, before becoming more focused in the rooms dedicated to his patronage of a distinct circle of modern British artists.  However, the veritable cabinet of curiosities representing his personal collection was perhaps the most interesting – in its sense of rifling through the back rooms of an auction house and coming upon a treasure trove of disparate yet often exquisite works of art.  There were illuminated manuscripts, pub sign illustrations, Coptic textiles, and a design by Larionov for Stravinsky’s ‘The Fox’; there were numerous sketches by Cezanne, a Seurat so beautifully simple as to be almost abstract (‘The Forest at Pontaubert’, 1881, right), and a Rodin sculpture of Eve (1881, above left), these rubbing shoulders with a C17th Madonna and Child in oil on a jagged block of quartz, a ghostly unfinished portrait by Reynolds, and a brightly glazed Luca della Robbia frieze.

What really impresses itself over the course of the three rooms exploring Clark’s patronage and war art commissions is the extent to which by these methods he effectively dictated the course of modern British art.  There is a certain era – broadly the 1930s-1940s – which is defined aesthetically by the art of his proteges: John Piper, Paul Nash, Graham Sutherland, and Henry Moore (‘Recumbent Figure’, 1938, above).  Perhaps Ben Nicholson should be included in the roll call too;  Clark did own one ‘white painting’ by Nicholson but was generally opposed to total abstraction, preferring a clear inspiration from nature.  They are still considered as a group today – Clark’s ‘New Romantics’ recently dubbed ‘Romantic Moderns’ by Alexandra Harris – and this is largely due it seems to the authoritative position, generous support and relentless PR of Kenneth Clark.

Beyond the famous shelter drawings of Moore and the sombre, moonlit ruined architecture of Piper, a good number of lesser known works are on show too.  The Euston School in particular are rarely shown in such quantity and stand up well against their contemporaries of the Bloomsbury group and New Romantics as examples of Clark’s early patronage.  Victor Pasmore I would never have recognised; having seen only his later abstract work, the deep colours and blurred edges of ‘the Red Tablecloth’ (1936) or his ‘Nude’ (1941, left) which has all the frank nakedness of a Freud or Saville rather than the timeless classicism of the Nude – which even Sickert 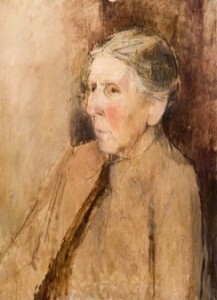 upheld despite the squalor of his Camden bedsits – were a revelation.  William Coldstream’s ‘Mrs Auden’ (1936-7, right) had an equally immediate presence, though subdued in colour, the features delineated with a lightness that conveys the pale fragility of the old woman herself.

Clark was also keen to revive the quintessentially British medium of watercolour, as demonstrated by David Jones, Frances Hodgkins and the Nash brothers.  Watercolour was encouraged by the WAAC; Paul Nash produced ‘Bomber in the Corn’ (1940, below), an idyllic scene of the English countryside, a pink sunset seeping across its horizon, in which the crumpled metal of the crashed plane – were it not for the painted cross – could almost be mistaken for a picturesque tree stumps or derelict cattle pens. 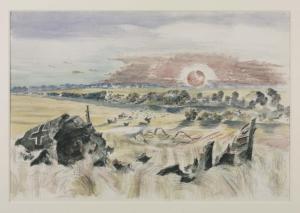 At the end of the room, full of large, powerful images such as Nash’s ‘Battle of Britain’ and Sutherland’s ‘Devastation’ of 1941, are a collection of pale pastel-coloured paintings of ethereal, waif-like figures.  These are by Mary Kessell, one of only three women to be commissioned as a war artist, who travelled to Germany in the immediate aftermath of the war, as the concentration camps were closed down, to document the refugees (‘Refugees’, 1945, below right).  Kessell isolates the figures, briefly sketched in in a thin wash, painting around them with a impenetrable mist of opaque pigment that cuts them off from any background context, their identity obscured and their refugee status rendered visually.

In the end Clark was best known to me – and probably to many others – for his television series ‘Civilisation’.  The final rooms are an odd mixture after the force and focus of the War Commissions display; they tail off into an epilogue of TV clips, and an assortment of objects from Saltwood Castle where, from 1953, Clark mixed ancient and modern with effortless style – an effect difficult to achieve in a gallery, and which might have been better unattempted.  Still, the exhibition certainly achieves its principal objective, illustrating the pivotal role that Kenneth Clark played in 20th Century British art, and offers some lesser-known artists a well-deserved place in the limelight too.