The Tate Modern has produced two bumper retrospectives this winter-spring.  Both the Klee exhibition and the Hamilton show address artistic oeuvres that are bursting with experimentation and creativity, yet remain difficult to classify and therefore often misunderstood – or at least underrated.  The success of both is to reveal the astonishing breadth and variety of these artists’ capabilities; from the diverse physical materials and techniques they employed, to their intellectual capacity to adapt aesthetically and respond to the the fluctuating fortunes of the twentieth (and early 21st) century.

Both take a similar approach in their early experiments, working in series to develop a new technique of mode of perception.  Klee explores the ‘oil-transfer’ method, drawing over a sheet of painted paper, so that the line is transferred to a black sheet below.  Once he begins to use colour, following his travels in Tunisia in 1914, he responds in a similarly logical fashion with his series of ‘gradations’, creating paintings built up from thin layers of watercolours that become gradually darker, like paint colour swatches (as above in ‘Comedy’, 1921).  Yet the effect is ghostly and beautiful, creating an underwater world of shimmering fishes or pots

reflected in ripples.  Hamilton plays with modes of etching while at the Slade in 1949, repeatedly printing various images of a reaper (right).  He later experiments with how far one can blow up a printed photograph (using images of people on the beach) before the subject matter disappears into a blur of monochrome dots (as in ‘People’, 1968, below).

Both rely on an innate geometry in their art, one that is based on organic, natural forms.  Hamilton’s ‘Out and Up’ (c.1951-2, below) could be a series of focal points within a grid but also embodies a protean, metamorphosing  life form – of jellyfish, perhaps, or amoeba.  Klee’s ‘Red-Green and Violet-Yellow Rhythms’ (1920, below left) uses more solid blocks of

pigment – yet their definite status is undermined as the colours overlap and run into one another.  Rudimentary trees force its reading as a landscape despite the determinedly abstract title.  It is a fiery, intense landscape of fragmented memories, reduced and organised in a modernist idiom that would come to be associated with modernism of the Bauhaus where Klee began teaching in  1921. 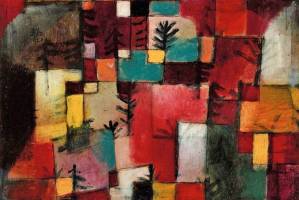 From his abstracted grid-like paintings, Hamilton introduces figuration back into his paintings – and in this his generation is clearly apparent.  In contrast to the post-First World War modernist idealism of Klee’s Bauhaus work, Hamilton’s painting becomes inextricably linked to the post-Second World War consumer culture of the 1950s and 60s – for instance in ‘Towards a definitive statement on the coming trends in menswear and accessories (a) Together let us explore the stars (1962, below). 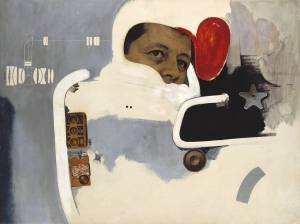 This interest in consumer culture and use of collage, infused with an anarchic satire, come to fruition in what is probably Hamilton’s best-known work and that which effectively coined the term ‘Pop Art’ as the central image of a naked bodybuilder holds a giant lollipop: ‘Just what is it that makes today’s homes so different, so appealing?’ (1956).

Despite the obvious differences – as Hamilton progressively focuses on celebrities and branded products, while for Klee, ‘art does not reproduce the visible; rather, it makes visible’ his idiosyncratic visions – both artists also coincidentally make use of the same symbols.

Arrows, for instance; a work like Klee’s ‘Greeting’ (left, 1922) can be compared with Hamilton’s series of paintings inspired by his commute up to Newcastle where he took a teaching job in 1953.  The visual experience of movement, and the speed of modern life in general, is likewise described using arrows.

Hamilton becomes more political and more figurative; Klee’s art is branded ‘degenerate’, the Bauhaus is closed and he flees to Switzerland.  Hamilton settles into a position of establishment notoriety, producing a series of self-portraits accompanied by polaroids of himself taken by artists he meets; Klee increasingly withdraws from the world from 1935, suffering a degenerative illness that would eventually lead to his death in 1940.  ‘Blue Night’ (1937, below) looks like broken letters, a melancholy echo of the destruction of culture being wrought by the Nazis.