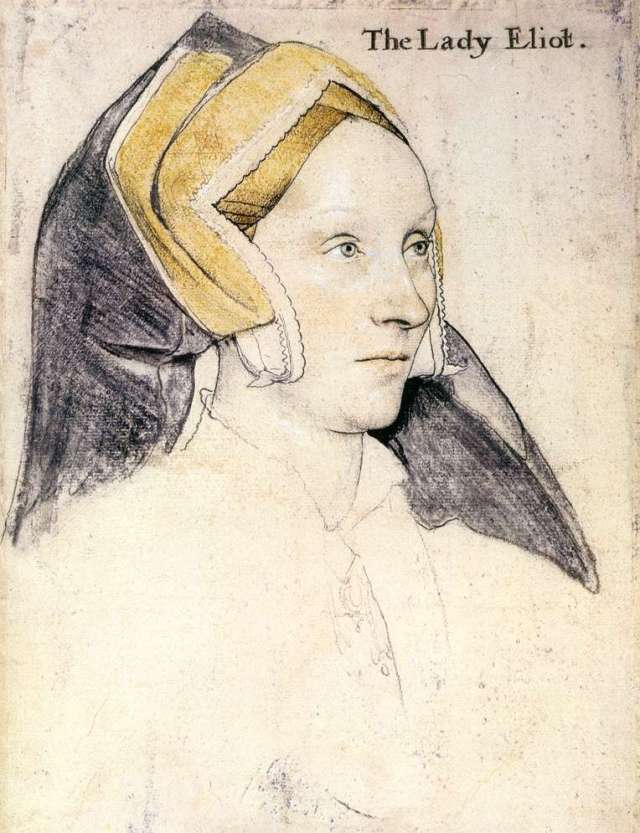 The exhibition of the art of the Northern Renaissance at the Queen’s Gallery is subtitled ‘Durer to Holbein’ and it is these two artists who dominate.  Deservedly so – though in this case it ought to be ‘Durer and Holbein’ with other artists’ works shown for contrast or comparison’s sake.  With the chosen title, the gallery has attempted an overview of the Northern Renaissance as a whole, and so  – unsurprisingly – there are gaping holes, a few random additions and arbitrary juxtapositions, and the previously noted bias towards the two eponymous masters.

I am not complaining.  We begin by meeting the intellectual luminaries of the day by way of a woodcut of Luther by Lucas Cranach the younger, a portrait of Erasmus by Quinten Massys, and Holbein’s preparatory drawings of Sir Thomas More and his family.  The drawings, in black and coloured chalk, are beautiful character studies; less harsh than the oils they convey the subtleties of skintone and texture.  Most avoid catching one’s eye, except for Thomas More’s father, whose pale blue gaze is arresting for this sudden human connection.  Thomas More senior was a judge, described as ‘virtuous’ and ‘merry’, though one barely needs this descriptive aid to perceive these traits in the wise, incisive, yet kindly eyes and the mouth with just a glimmer of a smile.

Strangely, these drawings are detached from the rest of Holbein’s work on show, perhaps so that the intellectuals are considered separately from the royalty and courtiers, who are given more space in the third and central room.  This room juxtaposes the drawings and paintings, often directly so that one can compare the study with the finished work and so gain an understanding of Holbein’s very precise and measured methods of working.  The paintings themselves remain intensely powerful in their simplicity of design, their vivid colours, and the force of character that they convey.  The subjects appear almost tangibly alive, their individuality emphasised by their wrinkles, scars, pallor or accentuated bone structure – or a slight tilt of the head that contains the hint of ruthlessness and arrogance in an ambitious courtier.

The drawing of a baby Prince Edward bears an uncanny resemblance to his father, but the ethereality of its execution simultaneously recalls a sickly life that would be cut short before he was fully grown.

Durer was represented almost solely by his etchings, engravings and woodcuts, which are unbelievably detailed and accomplished – but it was still a shame not to see more of his paintings, if only to compare to Holbein and Cranach, and to show off the full range of his talent (though perhaps the portrait of Burkhard of Speyer is the only Durer painting belonging to the Royal Collection, in which case the oversight is explained).  Particularly in contrast with Cranach the elder next door, who seems oblivious to human anatomy – though his golden-haired putty figures are key to his charm and shouldn’t really be compared, it would be like Gauguin compared to Manet, coming from different poles.  If Durer is an arch Realist (or sur-realist when it comes to the bible), Cranach is the Symbolist.  But I digress.  Durer created a diverse range of etched Virgins with Child – which struck me as odd; I had always imagined that an artist would have their own defined view of the how the V & C should appear and would stick to that, the variations from skinny to obese showing up the differing tastes and traditions between individual artists, if not whole different societies.  The disparity between Christ child images is far greater than that of Christ the man – here there seems to be a consensus, the differentiating factor being instead how graphically to display his wounds on the cross. 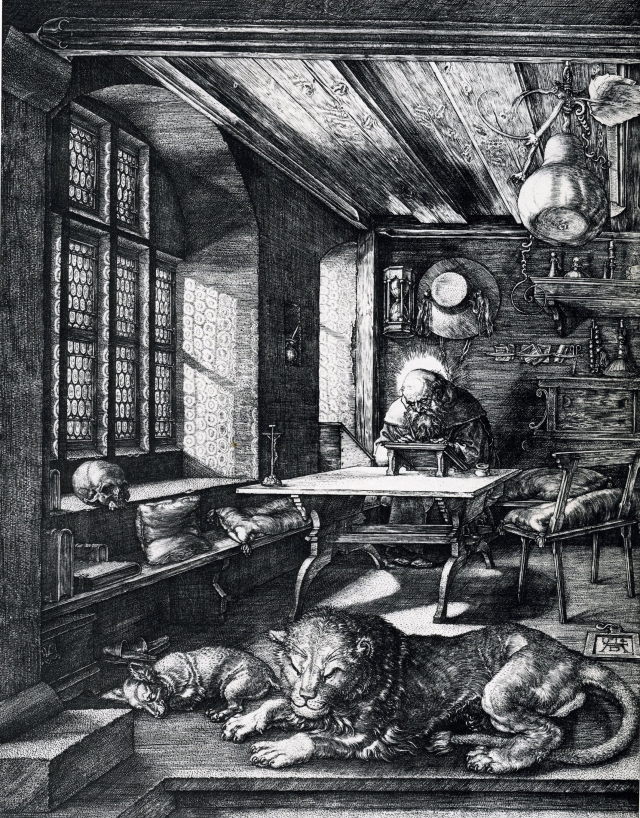 St. Jerome in his study – with lion and corgi happily asleep in the foreground – shows off Durer’s mastery of etching, from the grain of the wooden ceiling to the reflections on the window casement of sun through bottle-end glass panes.  The interior is full of the minute domestic detail that typifies the Northern Renaissance.  Likewise, St. Anthony at prayer is situated within a typical northern landscape of Bavarian hilltop towns with long steep roofs, crenellated towers and impregnable walls. 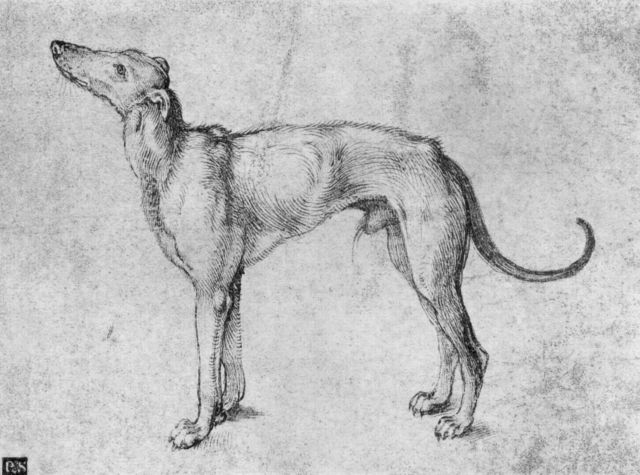 The series of woodcuts illustrating the Apocolypse are full of strange beasts, which must have really sparked Durer’s imagination as they are all – down to each separate head of the Hydra-like creature – individualised in their grotesqueness.  His joy in personifying Death and the vices, and all the terrors of Revelations reminded me (almost blasphemously) of Terry Pratchett.  But the most beautiful Durer was his brush-drawn study of a greyhound, as seen in the completed engraving of St. Eustace and the Stag beside it (Note to gallery: No postcard. Disappointing). 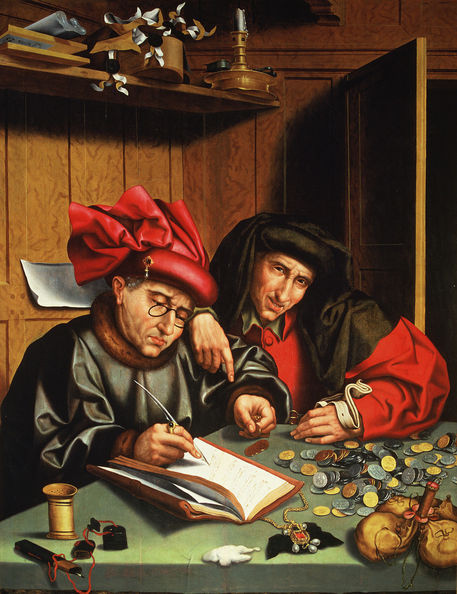 There were little diversions throughout the exhibition – a chalice here, a statue there, a suit of armour in the corridor – that I imagine were intended to broaden the perspective, acknowledging that paintings and etchings were not the only products of the Northern Renaissance.  Yet they were a little too random.  They might have fitted in better en masse, along with the spectacularly large Brussels tapestries in the final room, in an examination of the craftwork of the period.  This room instead tried to fit in all the other artists who weren’t Holbein or Durer or Cranach, but were considered jewels of the collection.  It was a fine collection of gems certainly, albeit in a ‘cabinet of curiosities’ style.  ‘The Misers’ by a follower of Marinus van Reymerswaele (above) must take the prize – what characters!  One can just imagine the same petty-minded types today, only no-one would be interested in painting them because they would be wearing Sensible Clothes (in grey or beige) rather than red turbans.  The sad little portrait by Jan Gossaert of Christian II of Denmark’s children deserves a mention too.  They are all three quite chubby but pale as ghosts, painted after their mother’s death – what a moment to choose.

And ‘Jonah and his Gourd’ was an oddity too.  Very prettily painted, a sun-drenched evocation of Mediterranean climes by a northerner, with a pale ghostly city framed by the first arch of the viaduct, yet its subject was wholly ludicrous.  Why does Jonah need a gourd – and a very puny one at that – to shelter under when there is a good sturdy bridge, or a rather cosy-looking cave on the far side?!  One cannot sympathise.  Artistic licence getting carried away again.

Brueghel’s ‘The Massacre of the Innocents’ was the finale – standing entirely alone in style and subject, its biblical narrative translated to a wintry Flemish village in the 1560s, pillaged by the Spanish army.  Not a sign of a murdered baby, however, just mothers, mourning loaves of bread; a skilful rewriting of history by a Habsburg emperor.  THere was much missing – where was Rogier van der Weyden or Van Eyck? – but as a selection of masterpieces from the Royal Collection it was a treat.  However, as a show of this kind it would have followed to give the history of the collection priority, using stories of a painting’s patronage or purchase to highlight the changing tastes and politics of our past rulers, especially in the erratic final display.

One thought on “A Royal glimpse of the Northern Renaissance”