Yesterday I went to a carol service at St. Mary-le-Strand.  It has a beautiful interior, the main body of which appears very calm – simple wood panelling at person height, then blank panels of carved grey stone divided by austere fluted pilasters, and clear glass windows high above.  However, crane your head back and the extravagance is all contained in the ceiling, in a profusion of plasterwork.

I have always wondered whether the Strand or the Church came first… It turns out that the Strand is an ancient east-west thoroughfare, and that it was the parishioners who in 1714 decided that their new church (the original having been erased by Lord Protector Somerset to build his house) should be placed right in the middle of the road.  It is therefore, by necessity, a basilica sort of church with an semicircular apse at the east end; transepts would have caused severe traffic problems.  There were political issues too.  The architect, James Gibbs, was Scottish and a Catholic, and had trained under the papal architect Carlo Fontana in Rome.  Shortly after the foundation stone was laid, the Hanoverians having succeeded to the throne, the Jacobite Rebellion broke out; it was not a good moment for him.  However, he agreed to work for free and the commissioners consequently turned a blind eye – money talks inversely too.  And so we have such flourishes of Italian Mannerism as gilded sunbursts and little decapitated putti heads swirling about in a tangle of joyful wings. 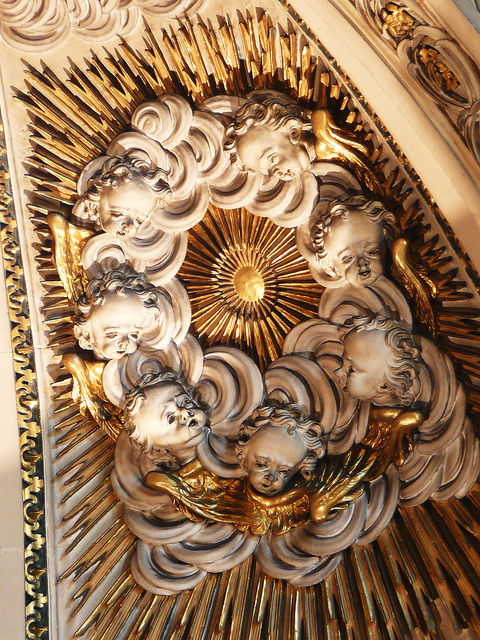 The Classical prevails however.  A triumphal arch is crowned by a pediment bearing the Hanoverian coat-of-arms – a stern warning to Gibbs (and any other putatively traitorous Scot).  Mellowed now and full of song, it is little haven of calm and beauty, literally in the midst of London’s crazy merry-go-round.