Yesterday I was returning a book to the Courtauld library when I got distracted by an exhibition in the vaulted ‘Deadhouse’ beneath the courtyard of Somerset House.  Paintings or no paintings, this is a space worth visiting.  There is a sense of adventure as you descend to the level at which boats entered from the Thames, then look up from the obscurity of the  narrow corridor of open space that runs round the courtyard, through networks of buttresses and balustrades and iron railings winding around steep, worn-down flights of steps…  Small cave-like rooms open off this corridor, one after another, a series of coal-holes perhaps, or cold-stores; now each stone cavity reveals a painting, spot-lit like a vision.  And then you enter the deadhouse itself, a silent, tenebrous space of coarse utilitarian brick and stone, unfurling beneath the courtyard where sun sparkles on ice, below perfectly dressed classical facades.  Here are the guts of the building beneath its beautifully dressed public exterior.

And Paul Benney’s paintings, hovering in pools of light, are imbued with drama by their crypt-like surroundings.  His use of resin over oil contributes to an eery ethereality in Her Ghost (below) and The Tenant, the unnervingly lifesized naked figures appear supplicating, drowning or asphyxiating in a blue haze. 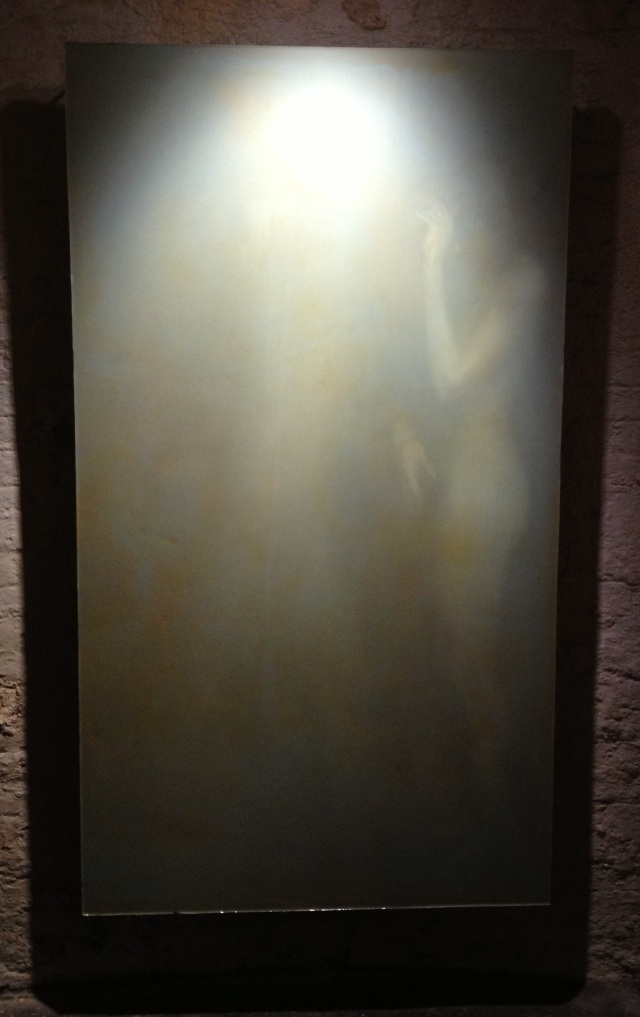 And then there are paintings of burning moorland with distant figures; and of a dog, turning momentarily in the dusk, the etiolated lines of a telegraph pole silhouetted against fiery sunset and portentous clouds, accentuating its utter solitude.  But the impending darkness, the misty obscurity, accompanied by an indistinct sense of menace, are lightened by macabre humour in Pissing Death.  A sudden injection of satire, in vein of Bosch or Burra intrudes on more metaphysical thoughts with its mocking memento of bawdy mortality.