It does surprise me that some animals survive.  Three roe deer, camouflaged perfectly against the russet moorland, would have escaped my notice entirely, had they not taken fright and and gone springing across the heather flashing their white backsides.  They may have been alerting their kin to danger, but this tactic backfires in that it alerts the danger too…  Likewise the oyster catcher; what sensible bird considers it a good idea to build its nest on open ground – indeed on a track regularly used by farming vehicles and walkers, in the middle of a field full of livestock?  And then gets agitated when anyone ventures too close, and considers an incompentent peeping noise a shrewd form of defence?  The survival of the species is a miracle.  They have all grown up and flown away now (I optimistically assume).

Today I saw a red squirrel, which are far more sensible creatures.  Fed up of fighting their unpleasantly aggressive grey – and black – cousins,  they have fled to the beautiful Highlands, where due to their endangered status they are utterly spoilt by all humans, fed on expensive shop-bought nuts and photographed for smart nature magazines.  This particular squirrel was a natural performer, bounding across the mossy lawn like Nureyev, sticking his fluffy blow-dried tail high in the air and digging furiously for a bit, before bouncing back for a second nut to bury.  He was clearly playing on the Beatrix Potter nostalgia of his captivated audience at the kitchen window.  (Apologies for the hopeless photo, um, spot the squirrel…) 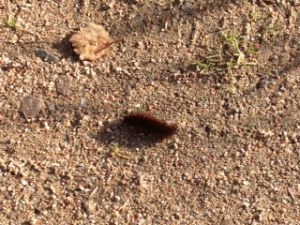 Later I saw this small and hairy caterpillar – like a grub in an expensive fur coat – crawling with great determination up the track to the steading.  I was concerned that he had left the business of transforming into a butterfly/moth a bit late, but perhaps was as confused as the rest of us by the freak weather (Sun? Warmth? Is this Scotland in October?!)

If not mentally prepared, walking in Scotland is liable to make me irritable.  The undergrowth seems determined to trip me up, clumps of heather hiding pot-holes, ready to pitch me headlong into peaty bogs masquerading as solid ground. Definite leakage in my left welly.  G&T on return not just civilised but vital to guard against trench foot.